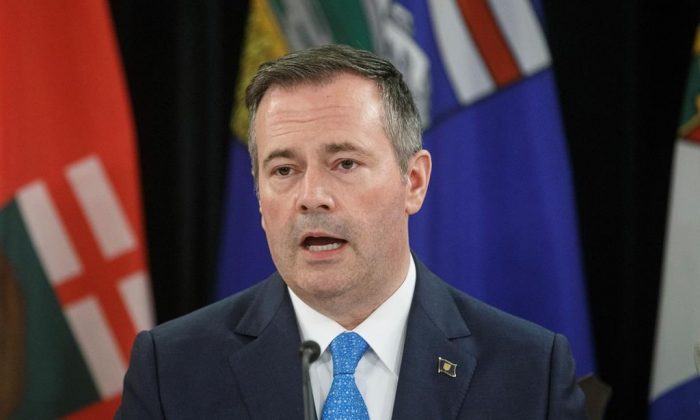 Alberta Premier Jason Kenney says it was a new, last-minute delay by Ottawa on whether to approve the Frontier oilsands mine that led Teck Resources Ltd. to pull the plug on the proposed $20-billion project—an accusation the federal government denies.

Kenney said the delay, coupled with weak federal response to ongoing pipeline protests, scuppered the mine and sent a renewed chill on investment in Canada.

The premier said he spoke twice to Teck CEO Don Lindsay over the weekend, prior to Teck announcing late on Feb. 23 it would not proceed with the mine.

Prime Minister Justin Trudeau’s cabinet was to grant or reject final approval of the mine by the end of this week, but Kenney said Teck was told that the timing had changed.

“The federal government let Teck know that there would not be a yes−no decision on the application this week, but rather it would be deferred to some point in the future, creating even greater uncertainty for that company,” said Kenney.

“I believe had it not been for that uncertainty, they would have proceeded with the project.”

In Ottawa, Cameron Ahmad, Trudeau’s director of communications, said “it is not true” that the federal government told Teck, before the company made its decision, that cabinet was going to defer.

“We had not arrived at a decision,” Ahmad said.

A spokesman for Teck did not immediately respond to a request for comment.

The project was expected to create an estimated 7,000 construction jobs, 2,500 operating jobs and about $12 billion in federal income and capital taxes, but was also expected to produce about four million tonnes of greenhouse gas emissions per year over 40 years.

Kenney’s government in recent weeks had drawn a line in the sand on the Frontier project. Kenney had said green-lighting the project was not only critical to Alberta’s struggling oil and gas sector but a symbol that Canada was open for business in energy development.

Teck, in a Sunday letter to the federal environment minister, cited political discourse over climate change as a reason for withdrawing its application for Frontier.

In the letter, Lindsay said investors and customers increasingly want jurisdictions to have a framework in place that reconciles resource development and climate change.

Kenney said he was surprised to see climate in the Teck letter, given that Alberta has emissions reduction programs in place for large emitters.

“We had meetings with Teck officials on and off for several months, probably dozens of meetings to communicate about their proposal. And they never raised with me, my staff or officials, (Alberta) emissions policy as an issue. Not once. Not once,” he said.

“The first we heard of that was in the statement last night.”

Lindsay, speaking at a mining conference in Florida on Monday, said Teck also shelved the project due to tensions over Indigenous rights, resource development and problems over recent rail blockades tied to B.C.’s Coastal GasLink project.

Oil, gas and the economy are key policy planks for Kenney’s United Conservatives.

Last spring, the UCP defeated then-premier Rachel Notley’s NDP in the election on a promise to boost the oil and gas sector and dismantle the NDP’s climate change plan, which included a consumer price on carbon.

Notley, now Opposition leader, said the Teck decision is Kenney’s to wear because he has poisoned and polarized the debate by demonizing those fighting against climate change as fringe radicals with a hidden agenda to sabotage Alberta’s economy.

“Jason Kenney has staked his political career on tearing all that (consensus) down, sowing division and undermining progress on combating climate change,” said Notley.

“The decision we see today with Teck is the direct result of that approach.”