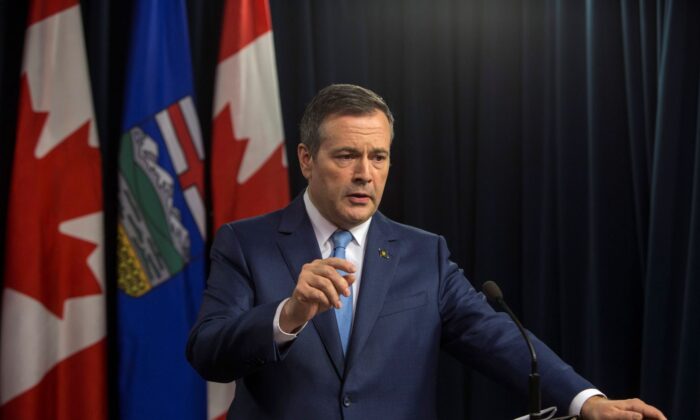 Kenney Looking for Leverage Over Ottawa With ‘Fair Deal Panel’

At the end of his speech at the Manning Centre on Nov. 9, where he announced the creation of a panel to explore measures to strengthen Alberta’s place in the Confederation, Premier Jason Kenney noted that the key for the province to get what it needs is to maintain leverage over Ottawa.

“It is existential for us that we get coastal market access, and so we must use wisdom to carefully stage each element of this fight for fairness,” Kenney said at the Alberta Manning Networking Conference in Red Deer.

In his speech he had detailed that the newly created “Fair Deal Panel would be consulting Albertans on ideas such as withdrawing from the Canada Pension Plan, collecting taxes directly, and creating a provincial police force to replace the RCMP.

When it comes to looking for leverage in negotiations, Kenney often uses poker analogy.

In May, when his new government enacted legislation to restrict oil and gas exports to B.C. in response to B.C. Premier John Horgan’s opposition to the Trans Mountain pipeline expansion project, Kenney said he would only use the new law if all other options were exhausted. However, he refused to reveal what would push his government to get to that point.

“When you’re in a game of poker, you don’t show the other folks around the table what your high card is,” he said.

About a year before that, when then-Alberta premier Rachel Notley said the province would buy the project from Kinder Morgan if necessary, Kenney, leader of the opposition at the time, scorned her for giving away the province’s bargaining leverage. “I’d love to play poker with Premier Notley based on how she’s mishandled this whole thing,” he said.

And it was no different this time.

Many of the ideas the Fair Deal Panel is tasked with exploring have been floating around for two decades in Alberta. They were proposed formally for the first time in 2001, in the so-called  “firewall letter” sent to then-premier Ralph Klein by several conservative figures. Among them was Stephen Harper, who would go on to become prime minister.

Klein didn’t implement the letter’s ideas during his premiership. But a committee of provincial legislators he created in 2003, called the MLA Committee on Strengthening Alberta’s Role in Confederation, examined some of the proposals.

Those proposals included the creation of an Alberta Pension Plan and direct tax collection, which the committee ultimately decided weren’t in the province’s interest due to various factors such as increased costs. For some of the other items, such as ending the contract with the RCMP, the committee recommended further studies to determine if it was in the province’s interest.

Duane Bratt, professor and chair of the Department of Policy Studies at Mount Royal University in Calgary, says that while most of the ideas the Fair Deal Panel is exploring would be within provincial jurisdiction and could be implemented unilaterally, there would be a lot of duplication with existing systems and additional costs involved.

“But what the [United Conservative Party] are saying is, well, Quebec is willing to pay for those programs, are Albertans willing to do so? We’ll find out in a couple of months,” Bratt said.

He points out, however, that in the case of Quebec, their provincial pension plan was created at the same time as the federal plan, so the cost of pulling out from the plan now would be much higher.

Bratt adds that there could be different reasons for Kenney to propose these ideas now, such as blunting separatist sentiment in the province, but it could also be just to get leverage over Ottawa.

“I don’t know if this is something he really wants to do, or whether this is about trying to get the federal government to backtrack on the carbon tax, or Bill C-69 or Bill C-48,” he said. “But there has been a lot of discussion prior to his speech on why shouldn’t we have these programs, and that if Quebec has pulled out of them, we should too, even if it costs us more money.”

Steve Lafleur, a senior policy analyst with the Fraser Institute based in Calgary, says implementing the proposals is not something to be taken lightly, and the province really has to do its due diligence on evaluating costs and potential benefits. But he says it’s important to realize that Alberta is contributing substantially to the finances of the country and has legitimate concerns given economic setbacks.

“Alberta does contribute a lot to the country. We really punch above our weight,” Lafleur said. But, he added, “it’s easy to get into an us-versus-them mentality,” so it’s important for all sides to uphold unity.

The Fair Deal Panel, which includes former Reform Party leader Preston Manning as a member, will submit its report in March, with any feasible ideas going to a referendum before implementation.