Pressure Mounts for Ottawa to Stem Flow of Opioids From China 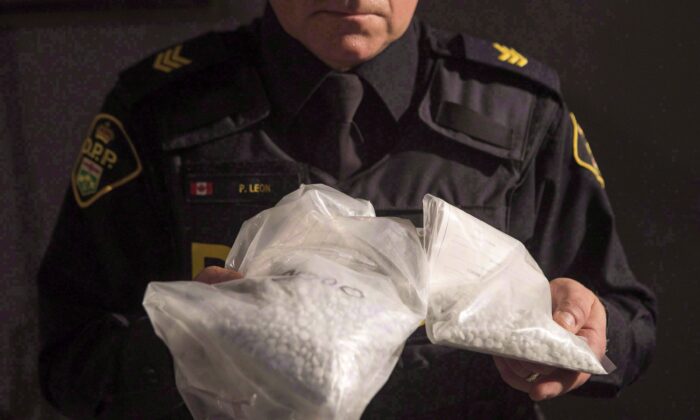 An Ontario Provincial Police officer displays bags of fentanyl during a news conference in Vaughan, Ont., Canada, on Feb. 23, 2017. (The Canadian Press/Chris Young)
By Omid Ghoreishi

Alberta Premier Jason Kenney is the latest Canadian politician to call for more action to stop the flood of opioids from China. The federal government has avoided criticizing China on the issue publicly, including before the arrest of Huawei executive Meng Wanzhou that raised the ire of Beijing.

Kenney said recently that while more needs to be done domestically, as part of tackling the opioid crisis, to help those with addictions get on the path to recovery, the federal government needs to act to “prevent the importation of opioids from China.”

Conservative Leader Andrew Scheer has also called on the government to “hold China accountable” for the flow of fentanyl into Canada.

A 2018 Public Safety Canada report on a law enforcement roundtable says China is the main source of fentanyl coming into Canada.

U.S. President Donald Trump has called Chinese opioid flow to the United States “almost a form of warfare.” His administration has put pressure on Beijing to take action to stem the flow. In response, the regime changed its designation of fentanyl to a regulated substance.

The White House announced that China agreed in late 2018, at the end of the G20 summit in Argentina, to heed a U.S. request to combat fentanyl exports. During that summit, Prime Minister Justin Trudeau said China was cooperating with Ottawa to stop fentanyl shipments to Canada.

However, a Global News report cited sources as saying that the Chinese import of fentanyl to Canada could get even worse because of diplomatic disputes between Beijing and Ottawa, with China refusing to take action. The sources made their comments before the Dec. 1, 2018, arrest of Huawei’s Meng on a U.S. extradition request, which has since significantly escalated tensions between the two countries.

The Epoch Times contacted Public Safety Minister Bill Blair’s office for Ottawa’s response to Kenney’s comments, but an emailed statement sent by a spokesperson made no mention of China.

“We are committed to doing everything we can to address illicit drug production, diversion, and trafficking,” the statement said.

It added that Ottawa has enabled law enforcement officials to search international mail under 30 grams on reasonable grounds, and it is investing $33 million in the Canada Border Services Agency to intercept fentanyl and other drugs.

Fentanyl is shipped to Canada mainly through shipping containers and mail, primarily through British Columbia.

There were close to 14,000 opioid-related deaths in Canada between January 2016 and June 2019, with fentanyl accounting for a majority of the deaths. British Columbia and Alberta have the highest death rates compared to their population in the country.

The drug is also responsible for around 30,000 deaths annually in the United States in recent years.

A New York Times report citing American officials says direct shipments of fentanyl-related substances from China have subsided since Beijing’s promise to take action against the drug, but U.S. officials want the regime to do more.

Mike Tucker, a spokesperson with the Alberta Law Enforcement Response Teams (ALERT), says fentanyl continues to be a problem.

“Have we seen an increase or decrease in the amount of pills or powder? I don’t believe so far that has been the case, but it’s going to be an ongoing battle to combat this drug,” Tucker told The Epoch Times.

Christian Leuprecht, a senior fellow with the Macdonald-Laurier Institute, says China is intentionally shipping fentanyl to North America to contribute to the downfall of the society.

“This is China fighting the Opium Wars of the 19th century for the 21st century,” Leuprecht, who is also a political science professor at Queen’s University and the Royal Military College of Canada, said in an interview.

“[U.S. President Donald] Trump has made stemming the flow of fentanyl from China to the United States a part of the trade negotiations. So it’s very clear that it is deliberate and intentional by the Chinese government to bring this material to North America.”

Since Canada doesn’t have the same kind of leverage that a superpower like the United States has, Leuprecht says Canada should be teaming up with the United States and asking Washington to include cutting the flow of fentanyl to Canada as part of the requirements when discussing trade with China.

The problem, he adds, is that Trudeau has done a poor job of getting on the good side of the current U.S. administration, one example being his comment that the downing of Ukraine International Airlines Flight 752 near Tehran by Iran wouldn’t have happened if there were no tensions in the region.

Ottawa’s approach, he says, should be “what federal governments usually do, which is to work constructively with whoever is in the White House and understand that given the current situation with China, it’s more important than ever.”

Sen. Vernon White, a former chief of the Ottawa Police Service, says information he has seen from the United Nations Office on Drugs and Crime show that as a result of the U.S. pressure on Beijing to stop the flow of fentanyl, some of the drug production operations have moved to other Asian countries. But China still remains a dominant player.

White, who stresses that we should be doing more at home to rectify the demand side of the opioid crisis as well, says that to combat the supply side, Canada should be banning companies caught shipping fentanyl-linked products from doing lawful shipments as well.

“It seems for China, trade is something that has impact,” he told The Epoch Times. “They need to understand that if they’re not going to do enough, from a trade perspective it’s going to impact them on legitimate trade.”