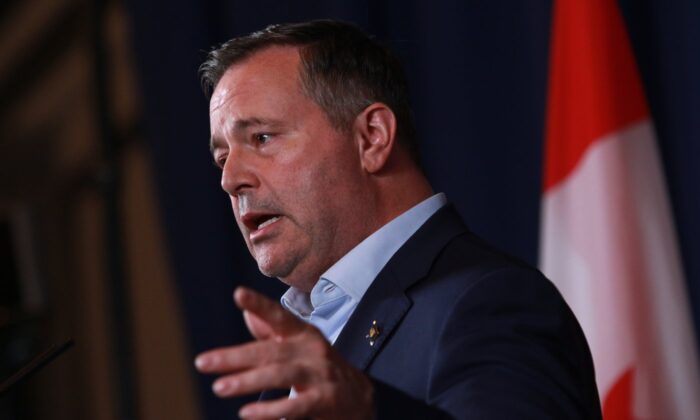 Alberta Premier Jason Kenney answers questions during a press conference as premiers meet on the final day of the summer meeting of the Canada's Premiers at the Fairmont Empress in Victoria, B.C., on July 12, 2022. (The Canadian Press/Chad Hipolito)
Canada

Alberta Premier Jason Kenney has called on his province’s energy industry to intervene in the provincial government’s court challenge of the federal Impact Assessment Act (IAA).

The IAA, or Bill C-69, which received royal assent in 2019 and which Kenney dubbed the “no more pipelines” bill, allows the federal government to consider the impacts of new resource projects and prohibit certain projects from being carried out if that act is believed to cause environmental changes.

The act allows Ottawa to assess the environmental impacts of intra-provincial pipelines and other energy development projects such that the federal government essentially has veto power.

During the Alberta Industrial Heartland Association (AIHA) annual conference on Sept. 15, Kenney said the IAA presents an ongoing obstacle to the energy industry. He urged companies to file amicus curiae, or “friend of the court” briefings, in support of the Alberta government’s court challenges against the IAA.

Amicus curiae are filings from parties outside of a pending lawsuit that argue or present information in support of, or against, one of the parties to the lawsuit out of its own interests.

“(The) federal approvals process … creates uncertainty and unnecessary delays and that is exactly why we kept our commitment to sue the federal government on the constitutionality of the bill,” Kenney said at the AIHA conference in Edmonton, the Vancouver Sun reported.

In 2019, Alberta launched a constitutional challenge against the IAA, calling it a “Trojan Horse” that seeks to intrude into provincial jurisdiction. The challenge received support from Ontario and Saskatchewan, as well as from the Woodland Cree First Nation, the Indian Resource Council, and some oil and gas producers.

On May 10, the Alberta Court of Appeal ruled the IAA to be unconstitutional, saying that while the environment has to be protected, it should not be a reason to override the Constitution and the federal system.

“The IAA involves another existential threat—one also pressing and consequential—and that is the clear and present danger this legislative scheme presents to the division of powers guaranteed by our Constitution and thus, to Canada itself,” a court decision said at the time.

The Alberta Court of Appeal’s ruling, however, is not binding on the federal government.

In the Alberta Law review, Andrew Leach writes that “the combined consideration of cumulative environmental effects, greenhouse gas emissions, and the link between pipelines and oil sands growth is likely to make it more difficult to approve a pipeline. This is because, when combined with recent changes to judicial review doctrine in Canada, the new regime will make it much more difficult for regulators and political decision-makers to justify such approvals.”

In July 2022, Ottawa announced plans to put the Alberta government’s non-binding ruling to the Supreme Court of Canada to make a final decision on the legality of the bill.