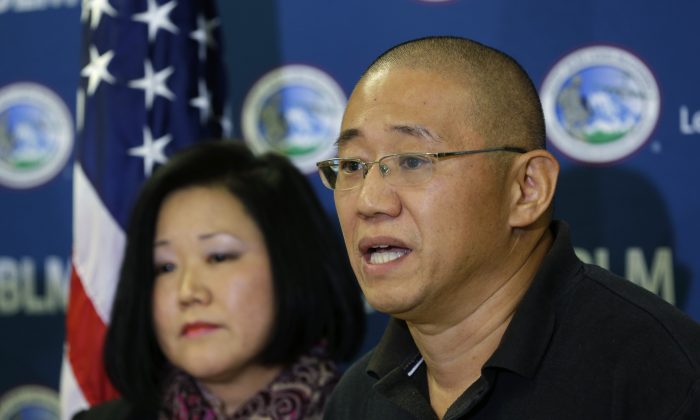 Kenneth Bae, right, who had been held in North Korea since 2012, talks to reporters after he arrived Saturday, Nov. 8, 2014, at Joint Base Lewis-McChord, Wash., after he was freed during a top-secret mission. At left is his sister Terri Chung. (AP Photo/Ted S. Warren)
Asia & Pacific

American Kenneth Bae, who was sentenced to hard labor prison in North Korea, speaks out about his time detained after his 2014 release on May 2.

Bae was a preacher who grew up in California and had launched a tourism business, bringing Christian groups to North Korea, and made 18 visits to the country.

However, in 2012 he made a “mistake,” Bae told CBS This Morning, by bringing a computer hard drive containing prayers and pictures of starving North Korean children.

“They said ‘You attempt to overthrow the government through prayer and worship’ and they really took prayer as a weapon against them,” Bae said

He was arrested and accused for plotting against the Kim Jong Un regime. Bae was sentenced in 2013 to 15 years of hard labor for espionage.

Under the badge “prisoner 103,” he was the longest held American prisoner in the rogue nation since the Korean War.

“It’s still stuck in my head. And I feel like I’m carrying this badge of 103 in my chest forever,” Bae told CBS.

“A blessing rather than a curse or suffering… when suffering comes to you, you have to face it.” — Kenneth Bae pic.twitter.com/3ZSZj4usKt

Bae, who is now writing his book “Not Forgotten,” detailing his time as a prisoner, said he was considered the most dangerous American criminal by North Korea.

“One of the prosecutors told me that I was the worst, most dangerous American criminal they ever apprehended since the Korean War. And I said, ‘Why?'” Bae remembered.

“And they said, ‘Because not only you came to do mission work on your own, you asked others to join,'” he added.

Bae believes he was a political pawn, stuck between tensions among North Korea and the United States.

“All of America really was on trial with me,” Bae said in his book.

“I believe that they blamed everything wrong with their country [on] America. They said the reason for poverty, the reason for their suffering is all caused by U.S. foreign policy against them,” Bae said. “And therefore, by indicting me, they were indicting the U.S.,” he said.

Bae spent almost 2 years in a hard labor camp until his release in 2014. He lost 50 pounds and was hospitalized briefly during that time.

I depended on God, and lived one day at a time, Kenneth Bae about his imprisonment in North Korea https://t.co/7Fx8MIKOSi

He was also verbally abused by North Korean officials.

One prosecutor constantly told Bae, “No one remembers you. You have been forgotten by people, your government. You’re not going home anytime soon. You’ll be 60 before you go home.”

However, Bae said he saw his suffering at the prison as a blessing.

“I am looking in the mirror in the bathroom every day, and say, ‘remember, you are a missionary. This is what you are here for,'” Bae told CBS.

“I took it more as a blessing, rather than a curse or suffering… Well it is very hard for me to even say that right now, but no one likes suffering, no one will embrace suffering but when suffering comes to you, you have to face it,” Bae added.

After his release, Bae said he is not bitter, and told CBS it was a chance to share his faith and teach his guards what life is like outside of the country.

“I hope that this book become a reminder to people to not forget the people of North Korea, have more compassion for the people who are living as a prisoner in their life,” he added.

During the interview with CNN, Bae thanked former basketball player Dennis Rodman for speaking out about Bae’s imprisonment. He said Rodman’s outburst drew attention to his case.

“I thank Dennis Rodman for being a catalyst for my release,” Bae said.

Rodman, who is friends with Kim Jong Un, had apparently sent out a letter to the young dictator asking him to release Bae.

I’m calling on the Supreme Leader of North Korea or as I call him “Kim”, to do me a solid and cut Kenneth Bae loose.

Meanwhile, an American student is now suffering the fate of Bae.

North Korea sentenced United States student Otto Frederick Warmbier in March to 15 years of hard labor for trying to steal a propaganda sign from a hotel.

Bae suggests that Warmbier’s family speak out to get more attention and pressure for his release.