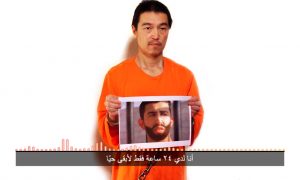 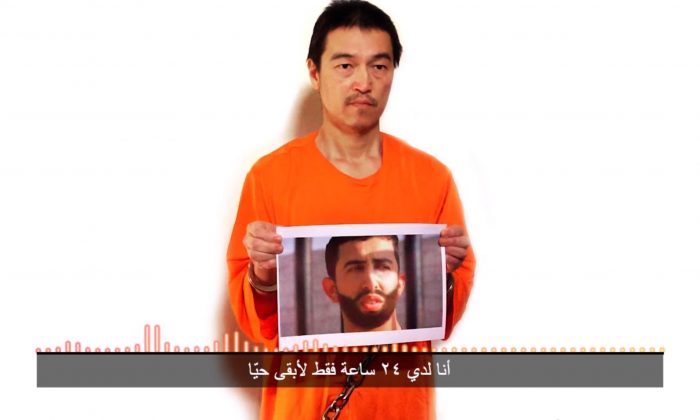 This still image taken from a video posted on YouTube by jihadists on Tuesday, Jan. 27, 2015, purports to show a still photo of Japanese journalist Kenji Goto holding what appears to be a photo of Jordanian pilot 1st Lt. Mu'ath al-Kaseasbeh. Both are being held hostage by the Islamic State militant group. The still image was overdubbed with audio which condemns Jordan for not releasing Sajida al-Rishawi, saying that unless she is freed within 24 hours both will be killed. The Arabic subtitle reads "I only have 24 hours left to live." The Associated Press could not independently verify the video. (AP Photo)
Asia & Pacific

Kenji Goto, the Japanese journalist captured in Syria, was purportedly beheaded in a new video from ISIS, or the Islamic State.

The terror organization had threatened to kill Goto earlier this week unless Japan agreed to its demands.

A video of Goto’s killing was leaked on Saturday but it’s unclear when the video was filmed.

Goto, 47, leaves behind his wife and three children.

The video, released on militant websites, heightened fears for the life of a Jordanian pilot whose fate had been linked to that of Goto. Earlier this week, Jordan had offered to free an al-Qaida prisoner for the pilot, but a swap never moved forward.

Japan’s Chief Cabinet Secretary Yoshihide Suga said the Cabinet was convening an emergency meeting and was rushing to confirm the authenticity of the online video.

Suga described the online video as a ‘deplorable terrorist act.”

Though the video could not be immediately independently verified by The Associated Press, it conformed to other beheading videos released by the extremists, who now control about a third of both Syria and neighboring Iraq in a self-declared caliphate.

The Committee to Protect Journalists, a media watchdog group, has described him as “courageous” and a hero.

Here’s what it said about him:

Since founding his news agency, Independent Press, in 1996, he has covered conflict in Chechnya, Albania, Kosovo, Sierra Leone, Liberia, Afghanistan, Iraq, and Syria, among other places. As a freelancer, he funds many of these trips himself. In Japan, there is an almost tribal loyalty between TV networks and their staff, but Goto has won the respect of the networks by visiting places they are reluctant to send their correspondents to. His documentaries regularly air on NHK, Japan’s national network, TV Asahi and others. But he would insist on taking responsibility for his own safety so they would not be blamed if he came to any harm. His friends think that was the point of his last video, recorded on October 25, before his kidnap, in which he said he took full responsibility for his actions.

Goto has experienced the full horror of war. In Liberia, friends recall, he talked about seeing hundreds of bodies being bulldozed into a grave the size of a swimming pool. In Iraq, he said a soldier put a gun to his head. But he has sought to draw out lessons from his reporting that are uplifting, especially for children. His DVD and book, Welcome to Our School, brought out by NHK in 2003, featured children in countries including Iraq and Afghanistan introducing their schools, even those closed by conflict, and talking about their love of learning. He has also written books about AIDS, child soldiers in Sierra Leone, genocide in Rwanda, and schoolgirls in Afghanistan. On visits to schools, he has told children in Japan how privileged they are that school is such a “normal” part of life.