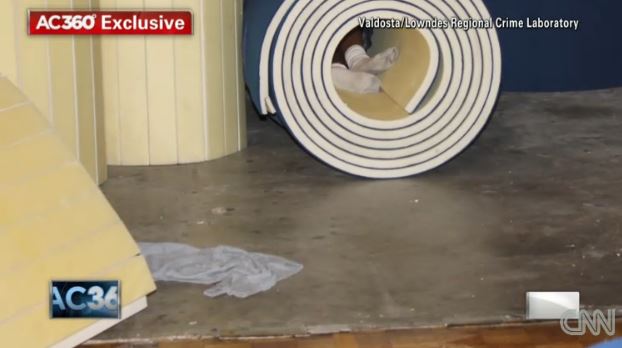 Kendrick Johnson died after getting stuck in a rolled up wrestling mat, but his family says it happened after he was struck by something and was a murder. (Screenshot)
US

New pictures from the Kendrick Johnson death case shows that the death was likely the result of “foul play,” according to an investigator.

A 15 minute video and nearly 700 photos taken by investigators in Lowndes County, Georgia show Johnson wedged into a rolled-up wrestling mat. His face is bloated with pooled blood, and there were streaks of blood on a nearby wall, reported CNN.

Investigators left some potential evidence at the gym, including one hoe and a hooded sweatshirt.

Harold Copus, an Atlanta private investigator and a former FBI agent, says he’s not sure how the crime scene was handled.

“If you’re running a crime scene, then you’re going to say ‘That’s potential evidence. Obviously, we’re going to check this out and find out who does it belong to,’ ” he said.

“I don’t believe this was an accident. I think this young man met with foul play.”

It’s possible that federal prosecutors will open up an investigation into the death, according to CNN.

Johnson’s father said that what happened is clear to him.

“Someone murdered him,” he said. “They should be in jail.”

“We already knew. Deep down inside we knew how Kendrick was. We knew he was murdered” Jacquelyn Johnson, Kendrick Johnson’s mother, told the broadcaster in September.

The Georgia Bureau of Investigation had found in its investigation that the death happened after Johnson suffocated by hanging in the mat upside down overnight after trying to grab a shoe.