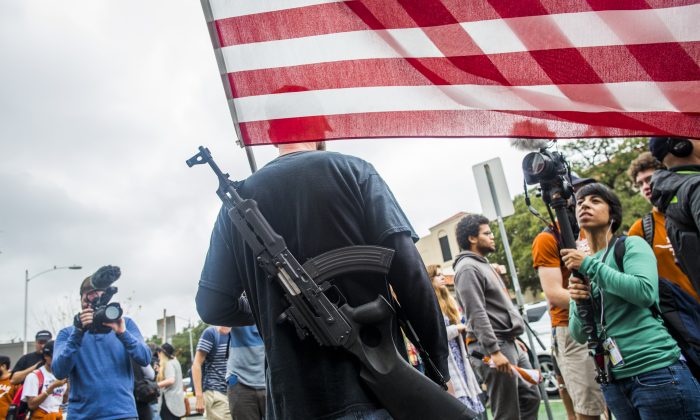 Gun activists march close to The University of Texas campus December 12, 2015 in Austin, Texas. In addition to the event put on by DontComply.com, a gun activist organization, the group also held an open carry walk earlier in the day. (Photo by Drew Anthony Smith/Getty Images)
US

Republican Ken Paxton’s flurry of nonbinding opinions addressed many much-watched issues, but could also spark a showdown with the University of Texas. His decision came barely a week after a panel at the school’s flagship Austin campus recommended allowing concealed guns inside classrooms but banning them in dorms and at sporting events.

The law taking effect in August requires public universities to designate specific areas where people with concealed handgun permits can carry their weapons. Lawmakers approved it despite strong opposition from students, faculty and even University of Texas System Chancellor William McRaven, the former head of U.S. Special Operations Command who directed the raid that killed Osama Bin Laden.

“If a public institution of higher education placed a prohibition on handguns in the institution’s campus residential facilities, it would effectively prohibit license holders in those facilities from carrying concealed handguns on campus, in violation of the express terms of Senate Bill 11,” Paxton wrote, referring to the measure’s title when it was debated and approved in the Republican-controlled state Legislature.

The recommendations, compiled by a working group of faculty, students and others, still need to be reviewed by University of Texas-Austin President Greg Fenves, who has said he has “deep concerns” about the law and its impact on campus safety.

“An individual whose legal rights have been infringed due to a president or chief executive officer of a public institution adopting regulations that exceed the authority granted in Senate Bill 11 would likely have standing” to bring a lawsuit, Paxton wrote.

Supporters of the new law say it’s protected by the Second Amendment and critical to self-defense. They, and opponents alike, point to the 1966 mass shooting at the University of Texas, when Charles Whitman killed 16 people and wounded dozens more from his perch atop the campus clock tower.

The law allows carrying concealed weapons on college campuses but only with a permit which Texans must be 21 years old to obtain. That means many college students are too young to qualify.

Also during this year’s session, lawmakers approved an “open carry” law, which lets license holders carry handguns holstered to their hips or otherwise in plain sight. It takes effect Jan. 1.

Paxton has been indicted on federal securities fraud charges stemming from before he became attorney general in January. Also Monday, he issued an opinion backing $200 million-plus in vetoes by first-year Republican Gov. Greg Abbott, whose line-item spending cuts were challenged by Texas’ nonpartisan budget board.

And Paxton found that in government buildings that have many uses, including housing courtrooms, authorities shouldn’t ban license holders from openly carrying their weapons in areas other than courtrooms.