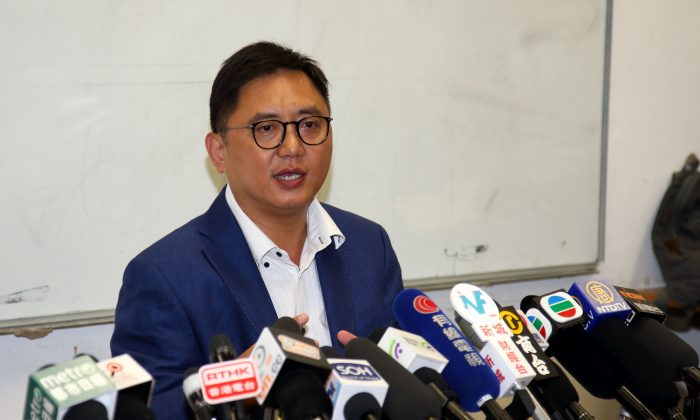 A Hong Kong politician who dropped out from the elections for the city’s legislature claims that his actions were the result of intimidation by Beijing.

Ken Chow Wing-kan from Hong Kong’s Liberal Party called for a press conference on Sept. 7 and revealed details of the coercion that led him to abandon his election campaign to represent the New Territories West constituency in Hong Kong’s Legislative Council (LegCo).

Chow’s revelation appears to be consistent with the Chinese Communist Party’s history of political interference in Hong Kong, a self-governing semi autonomous Chinese region with democratic institutions and freedoms not found on the mainland.

After withdrawing from the LegCo elections on Aug. 25, Ken Chow went into brief self-exile in Britain. He returned after the elections ended, and he immediately reported his case to Hong Kong’s Independent Commission against Corruption.

At the Sept. 7 press conference, Chow said that a day before he withdrew from the elections, he received a phone call from a friend in Shenzhen, the Chinese city bordering Hong Kong. Chow’s friend requested that he travel to the mainland to discuss some election-related matters at a hotel.

When Chow arrived at the hotel, three men who claimed to be from Beijing approached him and demanded that he pull out from the elections within 10 days. When Chow refused, the three strangers said that his family and supporters would “pay a heavy price” for his stubbornness.

The men from Beijing then rattled off to Chow the “background, sources of income, the lives and habits” of himself, his family, and friends of his who were important supporters.

“I began to feel afraid,” said Chow. The information that was revealed to him was “beyond what private investigators can uncover.”

“My world turned black,” he added.

Chow also revealed that the three men explicitly told him that a “Mr. Ho,” who had the support of a powerful rural organization and the vote of “relevant parties” “stood a very good chance of winning” the New Territories West seat Chow was contesting for.

‘Come Back After the Elections’

Ken Chow claimed that the three Beijing men insisted that he stop participating in all election forums, end his election campaign, and leave Hong Kong as soon as possible.

“Go however far you can, and only come back after the elections,” Chow recounted the men as saying. So he bought an air ticket the next day and left for Britain during the night.

One of the men later hinted that they hoped that by getting Chow to leave, “the people of Hong Kong will awaken and realize what is actually happening in the political sphere,” and wonder “whether some force has been interrupting and influencing the elections.”

Chow said that every single Hongkonger should have the right and freedom to stand in the elections, and felt that his case should raise the question of whether “someone is trying to manipulate the Hong Kong elections” from behind the scenes.

At the press conference, Chow also disclosed that an acquaintance from the business community asked him to pull out from the elections when the campaign first started. Chow’s acquaintance knew exactly how much the Liberal Party was funding his election campaign, and offered Chow twice that sum to drop out.

However, Chow said that he rejected the offer and told the acquaintance fiercely, “You will be breaching the law if you say more.” He added that the customers at the café where they were having their conversation were taken aback by his reaction.

Later on July 13, two “friends from an authority stationed in Hong Kong” requested to meet him at the Star Seafood Floating Restaurant in Sha Tin, a district in the New Territories. At the restaurant, the two men told Chow that the legislature seat in New Territories West didn’t belong to him, and that he “wouldn’t be blessed” if he ran.

Chow retorted that he didn’t need any blessings. The two men became angry and told him that he had alternatives to becoming a member of the LegCo, and that many “parties related to the government” could help him out. But Chow insisted that he would stand for the elections.

On nomination day, the two “friends” of Chow invited him to their office near the Star Seafood Floating Restaurant and asked him again to withdraw from the elections. They reasoned that Chow’s running would jeopardize the election chances of pro-Beijing candidates like Leung Che-cheung and Junius Ho.

When asked by a reporter if his two “friends” were from the Chinese regime’s Liaison Office in Hong Kong, Chow said “well, you know,” and added that he has to “keep some cards close to the chest.”

Incidentally, the Liaison Office has a branch office in Metro Plaza, Siu Lek Yuen in Sha Tin. The branch office is located near the Star Seafood Floating Restaurant.

Chow also added that his supporters from the Heung Yee Kuk rural organization informed him after his nomination that they could not make their support public owing to “some difficulties” that they couldn’t disclose.

Ken Chow said at the press conference that he had hinted at election manipulation prior to his withdrawal.

During an election forum hosted by TVB, Chow said that Hongkongers “are electing legislators, not promoting sons.” At another forum hosted by Cable TV, he said that the people of Hong Kong have to choose between “monitoring the government with ballots or remaining well-behaved and obedient, and being manipulated by others.”

After leaving Hong Kong in temporary self-exile, Chow continued on Facebook to urge Hongkongers to vote. Ultimately, over 2.2 million Hongkongers, or about 58 percent of registered voters, cast ballots for the LegCo elections.

Chow had expressed hope that Hongkongers decide for themselves who to vote for rather than taking orders on how to cast their ballots.

“In the past, everyone was afraid of being associated with the ‘[Liaison] Office’; now there are people who are openly thanking it!” Chow wrote. “If we accept that as normal, then we will have North Korea-type elections, and Hong Kong won’t have any freedoms or the right to self-determination.”

Chow’s comments appear to be a reference to Junius Ho, who expressed his gratitude to the Liaison Office after the elections. Chow also questioned Ho’s failure to thank the residents for their ballots.

The Liberal Party expressed shock at Ken Chow’s allegations and said that it would look over all the details before taking follow-up action. The Liberal Party urged Hong Kong’s anti-corruption body to conduct a full investigation into the matter to safeguard fair and open elections in Hong Kong and to alleviate the public’s concerns.

Lam Cheuk-ting, a Democratic Party legislator, considers Chow’s allegation to be a serious matter because it is an infringement of the “one country, two systems” governance policy.

Lam said that under Article 5 of Hong Kong’s Elections Ordinance, the Independent Commission against Corruption has the authority and responsibility to investigate those suspected of corrupt activity that occurs inside or outside Hong Kong.