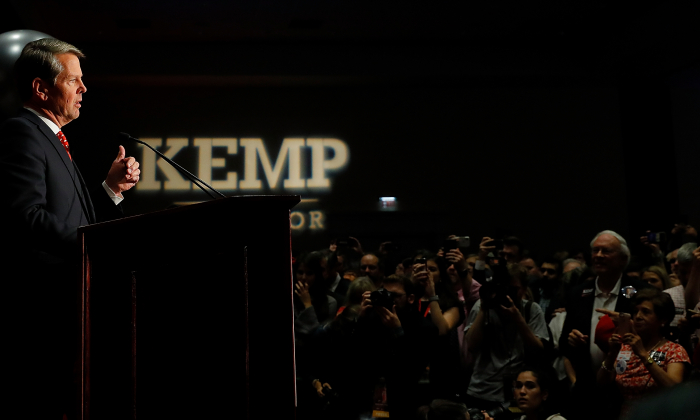 Kemp Calls on Abrams to Concede in Georgia; Arizona Race Still Too Close to Call

Georgia Republican gubernatorial candidate Brian Kemp called on his Democratic opponent, Stacey Abrams, to concede as ballot counts moved closer to a point that would rule out even an automatic recount or a runoff, much less an outright victory by Abrams.

Meanwhile, the race between Republican Martha McSally and Democrat Kyrsten Sinema to represent Arizona in the U.S. Senate was still too close to call on Nov. 11.

In a statement issued on Nov. 10, Kemp cited the latest ballot count figures to show that even if every uncounted vote was cast for Abrams, he would still win by a margin higher than what is required for an automatic recount or a runoff election.

Abrams has refused to concede until every vote is counted.

“Stacey Abrams’s antics are a disgrace to democracy and completely ignore the will of the people,” Ryan Mahoney, the spokesman for Kemp’s campaign, said. “This is not how America works. Brian Kemp earned a clear victory on Tuesday night and holds a sizable lead as remaining provisional and military ballots are counted.”

President Donald Trump wrote on Twitter on Nov. 9 that Kemp had won, and that “it is time to move on!”

Based on publicly available ballot counts on Nov. 10, Kemp led Abrams by 62,779 votes or 1.6 percent of the vote. At that point, there were an estimated 17,495 ballots left to be tallied, according to Kemp’s campaign. If every remaining uncounted ballot was cast for Abrams, Kemp would still have 50.1 percent of the vote, which would clear the threshold to avoid a recount or a runoff.

Kemp’s margin narrowed to 58,875 votes by the afternoon of Nov. 11. Based on the estimates from Kemp’s office, his lead would shrink to 45,284 if every remaining vote was cast for Abrams.

At the center of the dispute is the number of provisional ballots. Kemp’s office is citing official state figures reported by individual counties. Abrams’s office conducted its own survey, which found a larger cache of votes still unreported, according to The Atlanta Journal-Constitution.

A key midterm contest in Arizona between McSally and Sinema could also take days to decide. The votes were still being tallied on Nov. 11 with Sinema ahead of McSally by more than 30,000 votes. Sinema and McSally are vying to succeed Republican Sen. Jeff Flake, who didn’t seek re-election.

The delayed result is a familiar feature of the politics in Arizona, where candidates can wait for days or weeks to learn the final results.

That is because of a state law that gives voters the choice of mailing in early ballots or dropping them off at polling places as late as Election Day, requiring time to be hand-processed.

“I can relate. When I ran in 2016, I had to wait 10 days for my final results,” said Maricopa County Recorder Adrian Fontes, who, in his elected position, is responsible for overseeing the count of the nearly 500,000 ballots yet to be processed in Arizona’s largest county.

Hundreds of poll workers will hand-process the ballots in a county warehouse, which could take eight or nine days, Fontes said in a telephone interview.

The Secretary of State’s office will certify the results Dec. 3, though the winner may become clear before then as the vote count gets gradually updated.

McSally has been through the wait before. She won her House of Representatives race in 2014 by a razor-thin margin more than a month after the election.

That race also involved litigation, and a Superior Court judge declared her the winner by 167 votes over incumbent Democrat Ron Barber, following a state-mandated recount.