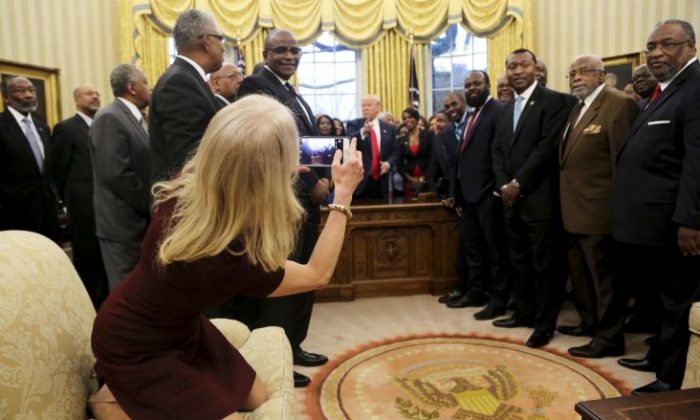 Counselor to the President Kellyanne Conway takes a picture of U.S. President Donald Trump with members of the Historically Black Colleges and Universities in the Oval Office of the White House, on February 27, 2017 in Washington, DC. (Aude Guerrucci-Pool/Getty Images)
Opinion

In the race to garner more clicks, Facebook shares, and retweets, how low can the legacy media go?

On Monday, President Donald Trump’s adviser Kellyanne Conway was photographed with her knees and feet on a couch in the Oval Office, sparking a controversy of sorts.

A number of media outlets and Twitter users focused on one photo of Conway in the offending pose, peering into her phone. Some failed to mention that she was trying to take a picture of Trump and the group of leaders of historically black colleges and universities (HBCU) visiting the Oval Office.

Another photo—taken seconds earlier—showed Conway on said couch, in the act of taking a photo of Trump and the leaders.

Despite the context provided by the less-circulated photo, it was too late. And the headlines spilled forth.

Marie Claire: “People Are Furious at How Kellyanne Conway Is Sitting in This White House Photo.”

The Independent: “Kellyanne Conway attacked after being pictured with feet on Oval Office sofa”

And on Twitter, the faux outrage was more palpable. “Conway with her shoes on the couch in Oval Office – consistent with general level of disrespect Trump team has shown,” wrote one person in a tweet that garnered more than 1,000 retweets.

“I have so many questions about this photo, but chief among them is why nobody is telling Kellyanne Conway to get her [expletive] feet off the couch,” posted Chicago Tribune columnist Rex Huppke.

Huppke should be informed that President Obama was photographed—many times—with his feet on the Oval Office’s Resolute Desk.

Remember when Obama had his legs on the desk and it was a four days scandal? pic.twitter.com/JyjXUDnZoP

It’s no secret that the Trump administration and certain media outlets openly hate one another, and the two sides both seem to benefit from the conflict. Trump gets (and has received) significant press coverage, and the press gets clicks, sells copies, and a boost in ratings.

But one question remains: Do legacy media outlets realize that by focusing on low-hanging fruit, such as the outrage surrounding Conway’s feet, they’re making themselves look bad?

Trump: I Think Obama Is Behind the White House Leaks

If polls and surveys can be believed, the public’s trust in the media is hitting new lows. According to Richard Edelman, who publishes the influential Edelman Trust Barometer, people in 82 percent of the 28 countries surveyed are “distrustful” of the media. A new Gallup found that only 32 percent of Americans trust the media—a new low.

Another theory that’s been circulating around pro-Trump Reddit forums and Twitter posits that putting her feet up on the couch was a calculated move to generate attention for Trump’s agenda by showing the president surrounded by scores of smiling black college leaders, countering claims of Trump’s alleged “racism.”

For the administration’s part, Trump aide Omarosa Manigault, told the Washington Post she regrets people don’t realize Conway’s “incredible respect for the office or this great historic place that we occupy.”