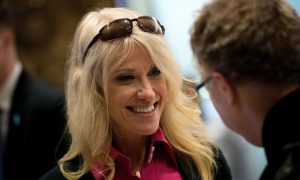 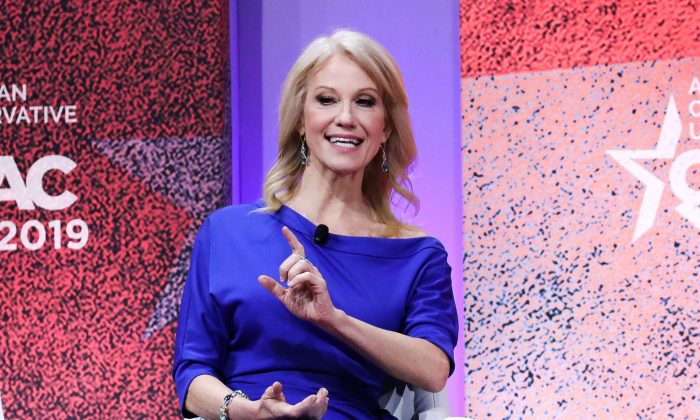 Senior Counselor to the President Kellyanne Conway at the CPAC convention in National Harbor, Md., on March 1, 2019. (Samira Bouaou/The Epoch Times)
US News

In an interview with Fox News on March 31, Conway didn’t answer if she felt her husband, George Conway, was pressuring her into quitting her job.

She said my “first line of protection in this world is and will always be my four children,” adding that she doesn’t “really like to discuss this publicly.”

She also blasted Fox News for asking about her marriage.

“What are you, Oprah now? … am I on a couch and you are a psychiatrist?” Conway said, reported Newsmax. “I think it’s a really inappropriate question … you’re asking a very personal question and I would say to you, you should go ask it of many people. I see messy lives living in glass houses all over both cities in which I live.”

Her husband recently made a number of statements against President Trump, who responded on March 20 in a tweet.

“George Conway, often referred to as Mr. Kellyanne Conway by those who know him, is VERY jealous of his wife’s success & angry that I, with her help, didn’t give him the job he so desperately wanted,” he tweeted, adding that he is a “loser” and the “husband from hell,” said Trump in a tweet.

Conway added that her husband was supportive of Trump at one point.

George Conway, often referred to as Mr. Kellyanne Conway by those who know him, is VERY jealous of his wife’s success & angry that I, with her help, didn’t give him the job he so desperately wanted. I barely know him but just take a look, a stone cold LOSER & husband from hell!

He had “cried on election night in his MAGA hat blocks away from here at the Hilton in New York, wanted to take a job in the Trump administration and changed his mind, and was a guest of the President and first lady months after he withdrew himself from consideration at the White House,” she told Fox News.

George Conway then “withdrew his name” and stated he “would still support the President and his agenda, and quote, ‘his wonderful wife’s work.’”

Conway didn’t address why her husband had a falling-out with the president despite her being a high-profile spokesperson in his administration.

Biden Has ‘a Big Problem’

In the interview, Conway stated that former Vice President Joe Biden has a “big problem” after Nevada politician Lucy Flores said he inappropriately touched her in 2014.

“If anybody just types… ‘creepy uncle Joe videos’ you come up with a treasure trove,” she said, reported Newsmax. “And I think Joe Biden has a big problem here because he calls it affection and handshakes.”

Biden, for his part, said that he didn’t act in an inappropriate manner.

“In my many years on the campaign trail and in public life, I have offered countless handshakes, hugs, expressions of affection, support and comfort,” Biden said in a statement to CNN. “And not once – never – did I believe I acted inappropriately. If it is suggested I did so, I will listen respectfully. But it was never my intention.”