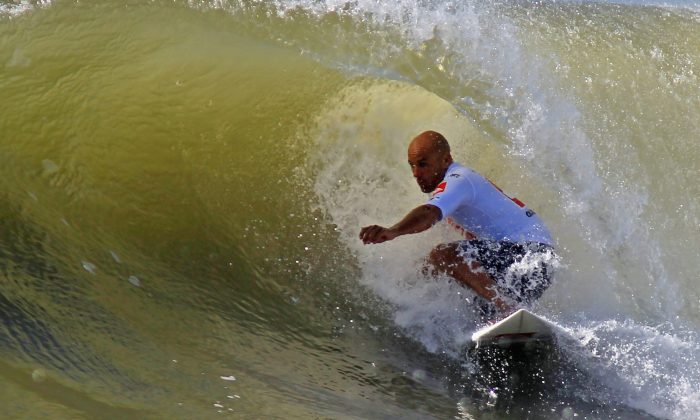 Slater launched the Kelly Slater Wave Company last year. He posted a series of clips of himself and fellow surfers in the wave pool on Instagram, Facebook and Twitter.

Although whether the wave pool will be open to the public or even the location of it hasn’t yet been disclosed by Slater, he has said it’s “110 miles from the coast,” according to a report on the Los Angeles Times.

Some who knew he had a warehouse in Los Angeles, suspected the site of a nearly half-mile-long former water-skiing pond outside the Central Valley town of Lemoore.

Surfers from all over the world have since made the pilgrimage to his site, but have been blocked by a locked plank gate and a security guard. A Los Angeles Times reporter even made the trip to see it, but (looking through a back fence) the wave monster wasn’t on.

The excitement around it is everywhere.

“When I saw Slater’s wave for the first time, it almost made me feel dizzy, like vertigo,” says Matt Warshaw, a longtime surf writer and author of “The Encyclopedia of Surfing.” “This changes fundamental things about how we feel about surfing.”