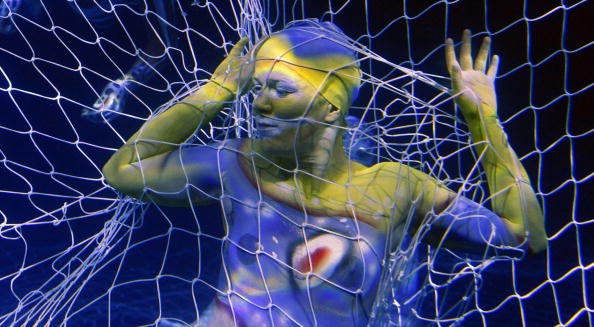 A diver body-painted as a sea creature demonstrates for a cast-off-ban of bycatch on November 3, 2008 at a swimming pool in Berlin's Schoeneberg district. (Michael Gottschalk/AFP/Getty Images)
Environment

Keeping Wildlife and Fisheries Afloat: The Conflict Over Drift Gillnets Along California’s Coast

In October 2010, two endangered sperm whales off the coast of San Diego made national headlines when they became entangled in a large drift gillnet used to catch fish. One of the whales died as a result while the other was critically injured. This entanglement has sparked a flurry of heated debate over the future of California’s drift gillnet fishery.

The fishery, which expanded rapidly throughout southern California during the 1970’s, operates primarily between Cape Mendocino in northern California all the way to San Diego, between 12 and 200 miles off the coast. During its peak, the fishery established the use of gillnets as the region’s primary mode to catch swordfish, thresher sharks and shortfin mako. The nets used can be as large as a mile in length and cover over one million square feet. They drift through the ocean waters, stabilized by buoys, entrapping fish by their gills that get caught in the mesh.

The fishery faces great opposition from wildlife researchers and advocates, as well as the general public, and with good reason. Drift gillnets are known to snag an abundance of marine wildlife such as whales, dolphins, sea turtles, and seals, in addition to the intended fish catch. Once entangled in the nets, these animals cannot surface for air and often drown as a result. The number of deaths caused by drift gillnets is exacerbated by the long lengths of time the nets are left in the water as well as injuries these animals sustain during entanglement.

The nets also yield high numbers of additional fish species, including multiple shark species. Some incidental catch, or bycatch, like the sharks, can be sold, but about 20-30% is simply discarded back into the ocean as a result of it being killed or severely harmed during the fishing process, or it not being a profitable variety of seafood. The fishery discards more large sharks than the number of swordfish it catches.

In fact, drift gillnets have such a high rate of bycatch that Washington and Oregon have banned fishermen from using drift gillnets in their waters. This leaves California as the only state along the western coast of the United States to still allow the use of these deadly drift gillnets. Thankfully, marine wildlife advocates don’t expect that to last much longer.

Currently, the use of drift gillnets is prohibited from February 1 to April 30 and within 75 miles of the coastline between May 1 and August 14. In 2001, in response to lawsuits and public outcry, the Pacific Leatherback Conservation Area (PLCA) was established, further prohibiting gillnet fishing between August 15 and November 15 from Big Sur to the Central Oregon coast. Unfortunately, though, these regulations have not been enough to prevent the entrapment of these animals, prompting public outrage and legal action as a result of violations to the Marine Mammal Protection Act and the Endangered Species Act.

In another step toward better protection, in September 2013 the National Marine Fisheries Service (NMFS) adopted an emergency rule to protect sperm whales from being caught in drift gillnets, after two of the whales were entangled in 2010. The rule shuts down California’s drift gillnet fishery if a single sperm whale is killed or injured in the nets. It also requires boats fishing in waters deeper than 6,500 feet, where sperm whales can be found, to employ independent observers to watch for the whales and monitor any interactions between them and the fishery. The rule expired on January 31st, 2014 and NMFS is considering the extension of this rule until permanent protections can be put in place.

Recent attempts to expand the drift gillnet fishery – like a proposal to the Pacific Fisheries Management Council (PFMC) to allow drift gillnet fishing in the PLCA – have been halted with the help of groups such as Defenders of Wildlife.  The Council declined the proposal, which could have resulted in increased death and severe harm to endangered Pacific leatherback sea turtles, and sent a letter to NMFS requesting that the emergency protection rule be reinstated.

Unfortunately, the extension of the emergency rule is only a temporary solution and does not stop the enormous number of fish and marine mammals killed or harmed with each drift gillnet fishing season. In order to significantly reduce the fishery’s unsustainable levels of bycatch and prevent the injury and death of marine mammals, sharks, and sea turtles, new fishing technology must replace the antiquated practice of drift gillnet fishing.

Earlier this year, California Assemblymember Paul Fong from San Jose introduced AB 2019, a bill that would ban the use of drift gillnets for commercial purposes in California. Defenders is working to enact this bill into law in order to require the replacement of destructive gillnets with economically feasible fishing methods that will reduce bycatch and the negative impact that commercial fishing currently has on marine wildlife.

This article was originally written and published by Haley Stewart, a contributing writer for www.defender.org. Click here for the original story and more information.