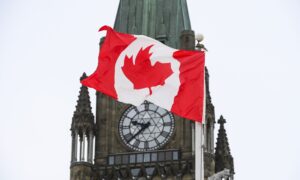 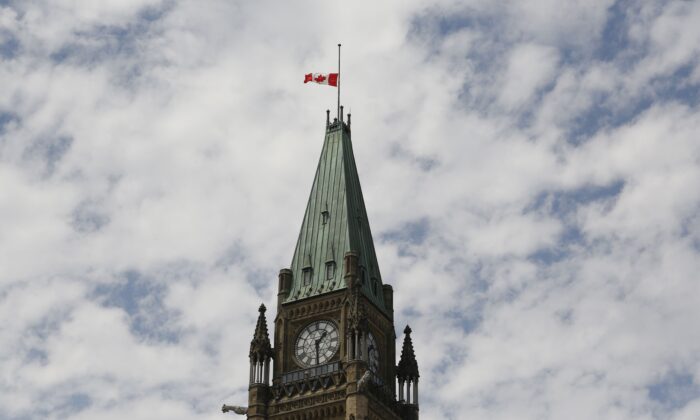 The Canadian flag on the Peace Tower on Parliament Hill flies at half-mast in recognition of the discovery of unmarked graves at residential schools, on Canada Day, July 1, 2021. (The Canadian Press/Patrick Doyle)
Viewpoints

Elections will always bring about new and unexpected wedge issues during the campaign. I don’t think anybody could have predicted that the status of the Canadian flag on federal buildings would come into play though.

The decision to fly a national flag at half-mast is not one to be taken lightly. It is an expression of collective sorrow on the part of a nation. There are well-established federal protocols for when the national flag is to be lowered and for how long. The flag is lowered upon the deaths of senior members of the British royal family, former prime ministers, governor generals, and other people whose passing is considered to be of national significance. The prime minister has the discretionary ability to have the flag lowered for unique tragedies as well.

Few Canadians felt that it was inappropriate to lower the national flag in response to the discovery of hundreds of unmarked graves deemed to belong to children at the sites of former residential schools. When the flags came down on May 30, however, nobody realized that Prime Minister Justin Trudeau had bizarrely ordered the lowering to last for an indefinite period. As we approach the four-month mark with our national flags at half-mast, Canadians are beginning to ask when the flags will be going back up.

Nobody really wanted to be the first to ask. Who wants to look so insensitive as to question a solemn expression of grief over such a tragic circumstance? In August, Conservative Leader Erin O’Toole took the chance and called for the flags to be raised again. During the debates, he reiterated the point and set Sept. 30 as the date to raise the flags as that will be the first National Day for Truth and Reconciliation. This appeared to be a good and symbolic day to choose to return the flags to the top of the poles. Unfortunately, election politics have come into play and Liberal Leader Justin Trudeau has said that only indigenous leaders have the authority to decide when the national flag will be raised again.

Trudeau’s stance has hopelessly politicized the issue, and if he is re-elected it is impossible to say when the flags may be raised again. Not every First Nations leader is of like mind on issues. How on earth would we be able to determine when the First Nations as a whole would like to see the flag raised again? Anybody daring to raise the flag now will be accused of insulting Canada’s indigenous peoples.

When the flag is perpetually lowered, the significance of lowering the flag is diminished. Meanwhile, other events and observances are passing and we aren’t able to lower flags in order to honour them. The National Day of Remembrance for Victims of Terrorism and Firefighters’ National Memorial Day have come and gone without the symbolic lowering of the flag. Other observances including Remembrance Day are approaching, and if we can’t lower the flag for that, we may as well simply do away with the practice altogether.

Canada is becoming known to be all talk and no action when it comes to reconciliation with indigenous peoples. Our indefinite virtue signalling with the national flag is no exception. It gives the impression that the government is doing something when in reality they have done nothing. If anything, this flag-lowering may actually be hindering real efforts at reconciliation.

Now that each major party leader has made its stance clear on the issue, it has formally become an election issue. If the Conservative Party wins the election, the flags will have a set date to return to full mast. If the Liberal Party wins, for all we know the flags may remain lowered until we have a change of government in a future election. It is shameful and frankly embarrassing to see a national symbol such as our flag being embroiled in an exercise of such crass political brinkmanship.

The world is going through one of the biggest challenges of a generation with the COVID-19 pandemic. Citizens are stressed and divided like never before. We need to see some optimism and to feel a little pride as a nation. Canada Day was already lost in a fervour of self-flagellation over the residential school tragedy. We can’t continue to live in a perpetual state of self-loathing and apology. In raising the flag again, it doesn’t mean that we consider the issue of residential schools to be closed. It just means that we have moved beyond the initial period of national mourning and now want to be unified in moving on with real action on reconciliation.

Unfortunately, our flag has shamefully become a political football and may remain so for some time to come.