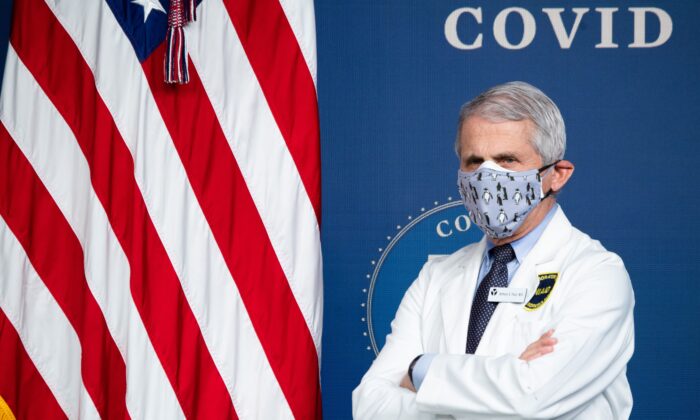 White House chief medical adviser on COVID-19 Dr. Anthony Fauci listens as U.S. President Joe Biden (out of frame) speaks about the 50 million doses of the COVID-19 vaccine shot administered in the United States, in the Eisenhower Executive Office Building in Washington on Feb. 25, 2021. (Saul Loeb/AFP via Getty Images)
Viewpoints

Keeping the Faith With ‘Science’

An interesting article at the RealClearPolitics website by J. Peder Zane recently explained “Why Newspapers Refuse to Correct Errors.” In case you’re a bit pressed for time and don’t want to look it up for yourself, I’ll give you the Reader’s Digest Condensed Books version in a single word. (Spoiler alert!)

The word is “narrative.”

“Increasingly,” writes Zane, “readers expect their favored news sources to advance their favored narrative, the facts be damned. And many news outlets, beset by immense economic challenges, seem happy to satisfy them to stay afloat.”

The most egregious recent example of narrative-led misreporting by the media is, of course, the allegation that members of the Trump administration, possibly including President Donald Trump himself, “colluded” with the Russians in order to win the 2016 election.

Reporters from The New York Times and The Washington Post won a Pulitzer Prize for reporting to this effect—reporting what we now know to have been false. The Post later published a few minor corrections to these stories, but the NY Times didn’t even do that. Neither paper retracted any of the allegations against Trump or apologized to him for their mistakes.

Zane comments: “The Times is not operating in a vacuum. One reason it is not owning up to its errors is that the people whose goodwill it depends on—its readers and the larger journalistic community, including the board of the Pulitzer Prize—do not seem to care. I think they believe our country is at war with itself and that admitting that the most prestigious news outlets on their side made grave errors in reporting the biggest story of the last five years would give succor to the enemy.”

That’s putting it mildly. It would give victory to the enemy, in this major battle if not in the war. Such a defeat would mean that the NY Times itself would cease to exist as we have come to know it.

It’s a good example of why, as I have written before, you should never identify yourself too closely with your opinions. Because when your opinions turn out to be wrong—as everybody’s opinions do from time to time—you can’t admit it, even to yourself, without in some sense canceling your identity.

What would the NY Times be without its grim certainty of Trump’s perfidy? Just another purveyor of “fake news”—like he said.

And that’s the worst of it, from the NY Times’s point of view, to admit that it was wrong, it would have to acknowledge that he—the man the paper has built its present identity around putting in the wrong—was right.

Unthinkable! As I think you’ll agree.

I bring it up because the principle involved is applicable to a lot more things than just the mistakes made by the media.

Consider, for instance, the mistakes made by scientists who have parlayed their scientific expertise and credentials into positions of power and authority over their fellow citizens.

People all over the place, that is, from Canadian truckers to fans of Joe Rogan to restive parents of young school children to the new governor of Virginia, are beginning to realize that the official advice of government-sponsored experts about how to deal with the pandemic, both individually and collectively, has been wrong in many, if not most, of its details.

New information coming in all the time has suggested that, for example, masks are largely ineffective and vaccine mandates are pointless, since vaccinated people can both catch and spread the disease as well as unvaccinated ones.

The experts can’t be unaware of this new information, but they can’t therefore admit that they’ve been wrong, or perhaps even that their opinions should be modified by it—because they have become too closely identified with “the science” as they understood it back in March 2020.

“I represent science,” said Dr. Anthony Fauci only a couple of months ago.

And that must mean that if he is wrong then science is wrong, a thing that can obviously—and not only to the unschooled—never be.

Even if he and his fellow experts are forced to admit that certain regulations instituted at their behest and stemming from their now out-dated information are no longer necessary, it doesn’t mean that either they or “the science” they pretend to represent can have been wrong—for that would to deny the very foundation of their so jealously guarded authority.

In other words, if Fauci doesn’t represent science—or, to be more precise, the mythical version of science as a fixed and unchanging set of dogmas that are understood by only an elite few like himself—where does he get off telling everybody else not only what to do but what to think?

This is why so many of those who believe that “science” is on their side in the culture wars have welcomed its politicization by Fauci and others, and why they have also built up that version of science into a kind of religion.

In this religion, masking and social distancing are the rituals, Fauci is the infallible pope and Joe Rogan the heretical Martin Luther calling all their most treasured certainties into question.

Its devotees need this religion to protect themselves and their precarious mental balance from the plague-caused uncertainties that bedevil the rest of us, and this is certainly understandable.

But those of us who do not share their touching faith should not be coerced, by one means or another, into joining in the rituals of their faith, or allowing its highly uncertain certainties to shield us from real science.