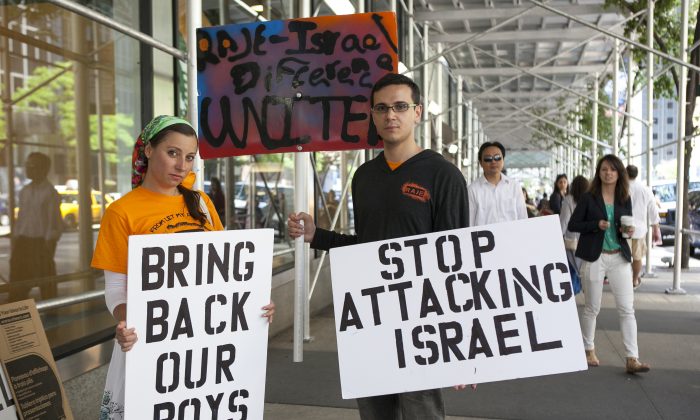 Supporters after a rally near the Israeli Consulate in New York City to bring awareness to the kidnapping in Israel of three teenage boys, New York, June 16, 2014. (Samira Bouaou/Epoch Times)
New York

Keeping a Vigil for Kidnapped Teens in Israel

NEW YORK—Members of the Jewish community in New York City held a Monday afternoon prayer service and vigil outside the Israeli Consulate in Manhattan as a massive search for three missing Jewish seminary students continued in Israel on Monday.

The search for the three teenagers—two 16-year-olds and a 19-year-old—has been concentrated in and around Hebron, the largest Palestinian city in the West Bank. Israeli troops have sealed the area, blocked access to roads, and conducted house-to-house searches.

One of the teens, Naftali Frenkel, has dual American–Israeli citizenship and family ties to New York City, according to multiple reports. Under the Koby Mandell Act of 2003, the U.S. Department of Justice has a special division to capture terrorists who harm American citizens living abroad. The search has turned into the widest crackdown on Hamas, an Islamic militant group, in the West Bank in almost a decade.

Frenkel’s grandparents immigrated to Israel from Brooklyn in the 1950s, but he still has family ties in the city through cousins.

“The media needs to understand what’s really happening there,” said Esther Lamm, from the community organization the Russian American Jewish Experience. Lamm joined the prayer vigil to draw attention to the plight of the boys.

Another supporter, Israel Jungreis, joined the rally out of concern for the larger situation of global terrorism.

“Terrorist attacks are increasing around the world,” said Jungreis, who plans to immigrate to Israel next month despite the dangers there.

For now, he said the most helpful thing he can think of to do is “continuing prayer” for the victims’ safe return.