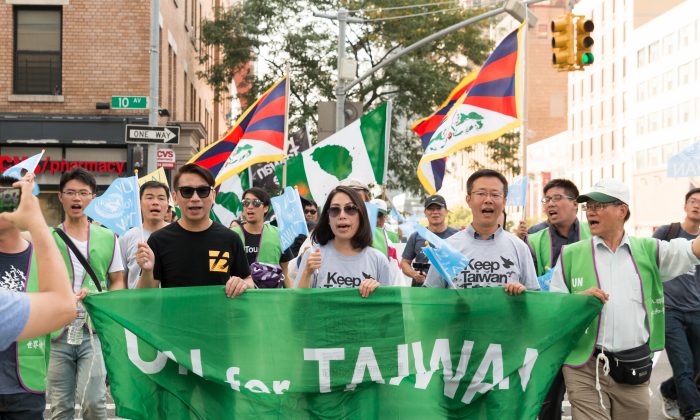 Hundreds of activists held a rally in New York City on Saturday afternoon to protest Taiwan’s exclusion from the United Nations and other international organizations. Taiwanese Americans, Chinese dissidents, and international supporters of Taiwan joined force with activists and politicians from Taiwan to push for Taiwan’s international participation as U.N. General Assembly started its new session.

China’s role in excluding Taiwan from the international community of nations was highlighted as activists kicked off their march to the UN Headquarters from the Consulate General of the People’s Republic of China in Hell’s Kitchen. In support of the rally prominent Chinese dissidents Yang Jianli and Teng Biao gave speeches in front of the consulate.

“China’s relentless and increasingly oppressive tactics to exclude Taiwan from the global community have only harmful consequences for mankind,” said Yang Jianli, who was jailed by the Chinese government from 2002 to 2006 for his pro-democracy activism. “Surely Taiwan has much to contribute to the world, and the UN should open its doors to the vibrant democracy of 23 million people.”

The “Keep Taiwan Free” rally was organized by the New York-based Committee for Admission of Taiwan to the UN and was held to coincide with the 72nd Regular Session of the UN General Assembly, which convened on Sept. 12 and runs through Sept. 25. Among those attending was a delegation from the Taiwan United Nations Alliance (TAIUNA)—a Taiwanese NGO that for 14 years has organized an annual trip to the United States to work for Taiwan’s inclusion in the UN.

A crowd of 600 participated in the event, according to organizers. Starting at 4 pm, the marchers walked across Manhattan and eventually reached the Dag Hammarskjold Plaza in front of the UN Headquarters at around 5pm. The march was peaceful and caught the attention of many New Yorkers who were strolling through midtown on Saturday afternoon.

TAIUNA President Michael Tsai, who is also a former Minister of Defense of Taiwan, said that no one should be barred from participation in the UN. Tsai argued that even Palestine, held to be a “non-state entity” by many, was able to join the U.N. as an observer two years ago. So, “why can’t Taiwan?”

Hsu Yung-ming, a Taiwanese legislator from the New Power Party flew from Taiwan and joined the rally. “Many people say the push for UN membership is impossible for Taiwan, but they fail to see what’s at stake here,” said Hsu. “Taiwan needs to make its voice heard by the international community. We need to make this an issue, and for the world to see there are 23 million people currently being excluded from the UN.”

Chang Hung-lu and Yu Wan-ju, two other legislators from the Democratic Progressive Party—the current ruling party of Taiwan—also joined the rally. “The fact that China has the power to exclude others from the United Nations is a violation of its founding philosophy, which is supposed to include everyone,” said Yu.

At Dag Hammarskjold Plaza next to the UN Headquarters, activist students took turns giving speeches supporting Taiwan’s return to the UN. June Lin, one of the young Taiwanese-Americans, said that the recent trial of Lee Ming-che, a Taiwanese citizen imprisoned by China, is the latest example why Taiwan needs to make its voice heard on the international stage.

Taiwan under the name “Republic of China” was kicked out of the UN by the 1971 General Assembly Resolution 2758 to make way for the People’s Republic of China. Taiwan has tried without success to reenter the U.N. since 1993.