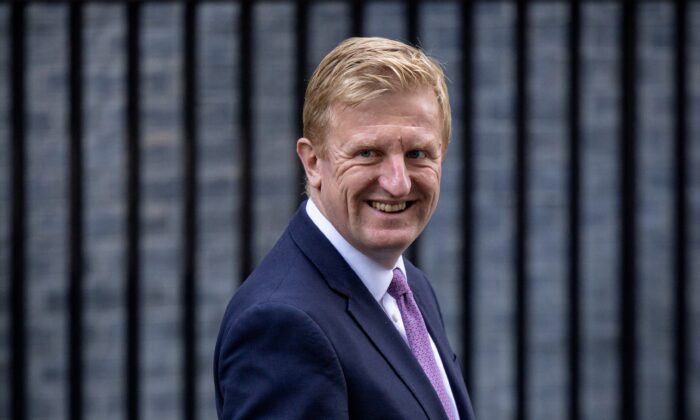 ‘Keep Calm and Carry On’ With Christmas Plans: UK Conservative

Britons should “keep calm and carry on” with their Christmas plans despite the detection of cases of the new Omicron COVID-19 variant in the country, the chairman of the ruling Conservative Party has said.

Talking to Sky News on Friday morning, Oliver Dowden said the Conservative Party has no intention of cancelling its own Christmas drinks.

“The message to people, I think, is fairly straightforward—which is keep calm, carry on with your Christmas plans,” he said.

“I understand that people have concerns around the new variant. That’s why the government has taken the sort of measures that we’ve already outlined,” he said, adding: “We think those are sufficient at this stage and, beyond that, people should continue with their plans as intended.”

Following the detection of the Omicron variant last week, the UK government has already re-introduced some COVID-19 restrictions, under which face coverings must be worn in shops and public transport, all travellers returning to the UK must take a PCR test and self-isolate until they receive a negative result, and all contacts of suspected Omicron cases must self-isolate, regardless of their age or vaccination status.

Dowden said he would encourage people to continue with their Christmas plans provided they take the booster vaccine and abide by the existing rules.

He said the Conservatives have a Christmas party planned and he had no intention of cancelling the event.

“We’re not changing our plans either. Of course, if the situation changes and rules need to be updated, we’ll comply with the rules as they stand,” he told BBC Breakfast.

Dowden’s comments came after some contradictory messages coming from ministers in regard to pre-Christmas gatherings.

In media interviews on Thursday, business minister George Freeman suggested that Christmas parties should be cancelled or scaled back to prevent the spread of the new variant of the CCP (Chinese Communist Party) virus.

Work and Pensions Secretary Therese Coffey also advised people to avoid “snogging under the mistletoe” during the festive season.

The suggestions were soon slapped down by a Downing Street spokesman, who said the government does not want people to cancel such events and “government advice does not set any limits on numbers.”

Talking to broadcasters later on Thursday, Prime Minister Boris Johnson urged the public to “continue as they are” within the new restrictions.

“I think we’re taking a balanced and proportionate approach to the risk, but I want and I believe that Christmas this year will be considerably better than Christmas last year,” he said.