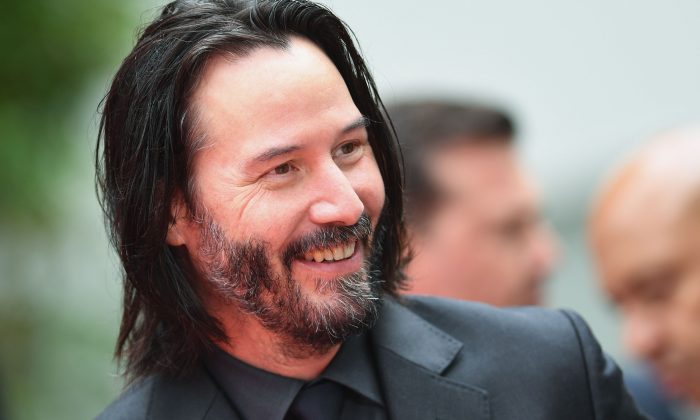 Most excellent, Keanu Reeves fans: The affable actor heard your prayers, and he answered with a “breathtaking” act of kindness.

His latest good deed to go viral occurred in Slidell, Louisiana, on Wednesday, July 17, when he stopped in on a fan on his way to a film set.

Stacey Hunt had heard that Reeves was filming the third installment in the “Bill and Ted” franchise just up the street from her home. Her 16-year-old son, Ethan, suggested the family welcome him to the neighborhood with a poster, she told CNN.

So at her son’s request, Hunt created a sign that read, “You’re breathtaking!”—a reference to Reeves’ appearance at the E3 gaming conference in June, where he told everyone in attendance they, too, were breathtaking. The moment became a popular meme.

A few hours after she planted the poster in her front yard, a car pulled up and a few people got out. You could say strange things were afoot in the Hunts’ yard as the group admired the poster.

That’s when Hunt, watching from her driveway, said she spotted Reeves.

She said she approached him in disbelief, and he asked whether he could sign her poster. Unsurprisingly, she said yes.

So yesterday this sign was out on a lawn on the way to set. Keanu jumped out of the car and did this. pic.twitter.com/OI1bQJ1nfy

Reeves even posed for a photo with Hunt and her sons, who came out of the house after she hollered that the celebrity was in their yard. Not even a filming schedule stopped the internet’s boyfriend—the term given to Reeves by the media because of his mysterious, thoughtful demeanor and proclivity for random acts of kindness, such giving up his seat on the subway or taking the time to stop and sign a ”breathtaking” poster.

After a few minutes of conversation about his new film and “The Matrix,” Hunt said Reeves nobly planted the sign back in the ground, shook the family’s hands and drove away.

“What you read about him being such a great person with a great heart is true,” she told CNN. “At least that’s what I think from my few minutes with him.”

It’s the Year of Keanu

The summer of 2019 is the season of Reeves and his resurgence. And boy, has he been busy. He starred in the third installment of his hyper-violent saga “John Wick,” made a self-parodic cameo in the Netflix rom-com “Always Be My Maybe” and voiced Canadian stuntman Duke Caboom in “Toy Story 4,” all released to critical acclaim within two months.

And despite his absence on social media, the internet has quickly adopted the lovable Canadian as an avatar for average folks and, of course, meme fodder.

Ever the gentleman, Reeves has been hailed as a “respectful king” for keeping his distance from women while posing for pictures.

Paparazzi photos of the actor even inspired a popular Twitter account devoted to Reeves relatably going about his day, from eating a sandwich alone on a park bench to riding the subway.

The message for Reeves fans: Be most excellent to each other.