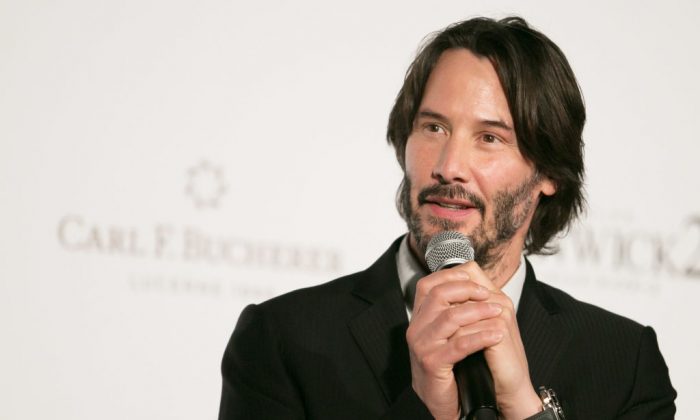 Keanu Reeves Has a Message for China

In recent years, American actors including Michael Douglas, Michael Pitt, Frank Grillo (who played a starring role in “Wolf Warrior 2,” the highest-grossing Chinese film in history), Bruce Willis, and Adrien Brody have all contributed to the pro-China narrative.

Of course, one cannot discuss actors and pro-China narratives without discussing John Cena, a man who had the audacity to call Taiwan a country. For that “faux pas,” he apologized to the Chinese Communist Party (CCP). Profusely. In fluent Mandarin. There are apologies, and then there are apologies. Cena’s performance was Oscar-worthy.

Thankfully, there’s one actor who’s not interested in apologizing to the CCP. That man is Keanu Reeves. When it comes to China, unlike the above-mentioned actors, “The Matrix” star has clearly chosen the red pill over the blue.

Born in Beirut, Reeves, 57, isn’t just an accomplished actor. He also happens to be an accomplished musician. On March 3, he will perform at the 35th annual Tibet House U.S. Benefit Concert, alongside the likes of Patti Smith, Trey Anastasio, and Jason Isbell.

Founded at the request of the Dalai Lama in 1987, Tibet House is a New York-based educational nonprofit committed to the preservation and protection of Tibet’s ancient traditions of philosophy, art, and culture.

As I’ve shown before, the CCP is interested in Tibet for one very specific reason—its natural resources. The Tibetan plateau, home to more than 46,000 glaciers, has one of the largest reserves of fresh water in the world. Known as the “water tower” of Asia, close to a quarter of a billion people in 10 different countries across Asia—Bangladesh, Cambodia, China, India, Laos, Burma (Myanmar), Nepal, Pakistan, Thailand, and Vietnam—rely on this “tower” for water. Make no mistake about it, the CCP wants to control the continent’s water supply, hence its obsession with controlling Tibet.

The people of Tibet are desperate. While most of the world sits idly by, Reeves, to his credit, is prepared to take a stand. Not surprisingly, the Chinese are far from happy.

As The Hollywood Reporter recently reported, the actor has “incurred the wrath” of millions of Chinese nationalists. The “Little Pinks,” a group of young, hyper-aggressive, overly jingoistic digital warriors are now suggesting that Reeves, and all of his future work, should be banned from China. The movie star is fast becoming a “de facto persona non grata in the Chinese entertainment landscape”—which makes his willingness to defend Tibet all the more impressive.

Worth somewhere in the region of $380 million, Reeves doesn’t need to perform. He doesn’t need to do anything. But he has offered to. And that’s something worth celebrating.

After all, it’s been a long time since a genuine Hollywood heavyweight stood up to China. In fact, it has been the best part of 30 years.

In 1993, Richard Gere, then one of the biggest stars in Hollywood, made headlines around the world–especially in China. At the Oscars, Gere took the stage to present the award for best art director. Before announcing the winner, however, Gere, a practicing Buddhist and long-time friend of the Dalai Lama, went totally off script, criticizing the CCP’s occupation of Tibet as well as its “horrendous, horrendous human rights situation.” For telling the truth, Gere was punished severely. The committee chose to ban him from future Oscars, a ban that still exists to this day.

It’s clear to see that Gere has paid a heavy price for his honesty. In 2017, the actor told The Hollywood Reporter that there were (and still are) “movies that I can’t be in because the Chinese will say, ‘Not with him.’” He said, “I recently had an episode where someone said they could not finance a film with me because it would upset the Chinese.”

A year before this rather depressing interview, the musician Lady Gaga, a formidable actor in her own right, met with the Dalai Lama. Because of this, she finds herself in a similar boat to Mr. Gere. The artist is now banned from touring or selling merchandise in China.

Which brings us back to Mr. Reeves. Why take a stand? Why jeopardize his acting career?

When it comes to movies, the Chinese market, lest we forget, is by far the biggest in the world. For Reeves, there appears to be more important things than money. In 2019, The New Yorker published an interesting piece titled “Keanu Reeves Is Too Good for This World.” After reading the piece, it’s difficult not to agree. He certainly appears to be too good for Hollywood, a place full of moral grandstanding and superficial concerns.

While many actors pretend to stand for something, Reeves actually does. For this, he deserves a great deal of credit.