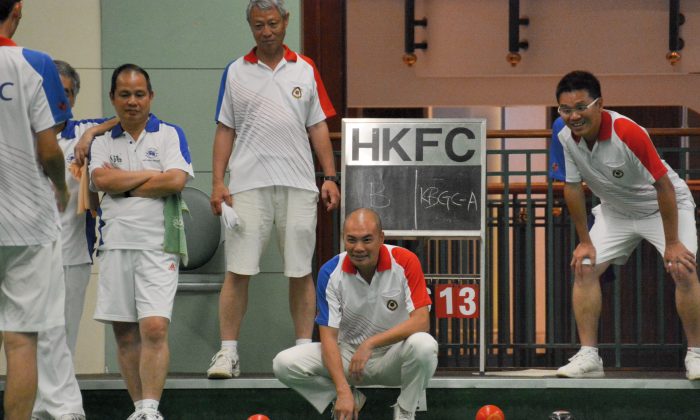 KCC Returns to Top of the League

Defending champion Kowloon Cricket Club climbed to pole position of the Hong Kong Lawn Bowls Association Premier League for the first time this season. Their climb to the top came as a result of winning their home game against newly-promoted Island Lawn Bowls Club and some favourable results from teams around them.

KCC, who recruited a number of new players from arch-rival Kowloon Bowling Green Club (KBGC) to strengthen their team, has failed to impress since day one of the season. The biggest disappointment for KCC would be the team led by former Hong Kong No.1 Noel Kennedy—as it includes two new top level recruits, Ken Chan and Bernard Leung.

Kennedy’s team has only triumphed twice in the first six weeks of the season and was again on the receiving end last Saturday June 8. He lost 20-21 in a tightly contested match against Roger Tse.

The other two teams, led by former Hong Kong International Danny Ho and Chadwick Chen, did not face many problems in their games and won their matches easily at 21-7 and 28-11, respectively.

Meanwhile, Hong Kong Football Club, whose “B” team began the day as competition leader, suffered a 3:5 lost at home to last year’s runners-up KBGC’s “A” team and dropped to second.

KBGC-A’s Heron Lau, one of the top bowlers in Hong Kong, continued his poor form with another defeat, this time at the hands of CT Wong. Lau was winning 15:13 at the penultimate end, but lost three shots on the last end. This was his sixth defeat of the season, three have been by one single shot.

While Macau International James Cheng could only manage a draw with his HKFC-B opponent Johnny Tsang, the team led by Chinese International Terence Lee came to the rescue, winning 22:17 and securing the aggregate points.

After the games last weekend, KCC move to top with 37 points, followed by HKFC-B (36) and Craigengower Cricket Club (36), who beat Indian Recreation Club 6-2 at home. KBGC-A is further behind with 33 points.

The top-of-the-table clash between Hong Kong Football Club’s “A” team and Shatin Sports Association finished with the former winning the game 6-2. STSA remain on top at 40 points, while HKFC-A moved to 36 points, with a game in hand.

At the bottom, both Craigengower Cricket Club and Club de Recreio could only draw with their respective opponents, Seabird Sports Association and Kowloon Cricket Club, leaving themselves anchored to the bottom still.