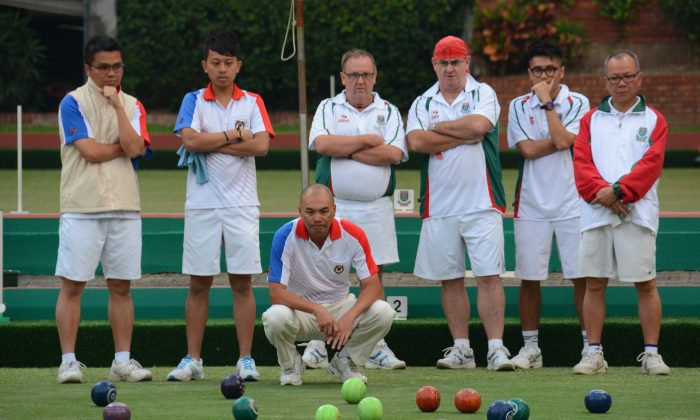 Both the Kowloon Cricket Club team (right) and Kowloon Bowling Green Club team are in deep concentration in their last game of the season, which was also a title decider. The game finished tied at 4:4 and KCC lifted the HKLBA Premier League Men’s Division One trophy at the end. (Stephanie Worth)
International

A draw at home with arch-rival Kowloon Bowling Green Club in the last game of the season was enough for Kowloon Cricket Club to win their 14th Hong Kong Lawn Bowls Premier League Men’s Division One title—a record they now share with Craigengower Cricket Club.

The final showdown between the top two teams was played under beautiful weather last Saturday Oct 26, when all men’s teams played their last game of the season simultaneously.

Trailing the leader by a point, KBGC knew that they needed to win the game to regain the trophy that they lost to KCC last year.

Both teams sent the strongest possible line-up for the game and KBGC’s Terence Lee quickly established a strong lead against former Hong Kong international Danny Ho. Lee finished the game 28:5 to ensure that the KBGC team will at least draw the game.

With the other KBGC skipper James Cheng looking doomed in his game against Chadwick Chen, the last effort relied on Heron Lau, who played against former Hong Kong No.1 Noel Kennedy.

The game was a tight affair all the way through to the final few ends.

Significantly, on the 17th end, with Lau chasing Kennedy by two points, he tried to take out the opponent’s two closest shots, but accidentally took out his own bowl and lost three shots in this end.

In the last end, Lau knew that if he can take five shots his team, KBGC, will win the championship. He was holding three shots with his last bowl to play. Winning would take a superb shot under immense pressure. Lau succeeded in hitting the opponent’s two bowls with his running shot, but unluckily one of the bowls was pushed into the head and KCC won the game 20:14 to secure the title.

KCC’s victory signifies their 14th title in the top flight since the HKLBA was established in 1961. It is also their third title in five years (or fourth in seven years). The only other club who possesses the same number of trophies are CCC, who last won the title in 1994.

At the other end of the table, the two promoted teams dropped back to the division they dominated a year ago after a brief appearance in the top flight.

In the last game, the already relegated Island Lawn Bowls Club dragged Filipino Club with them back to Division Two next season.

FC, who had a good chance to escape relegation if they beat ILBC in the last game, could only come away with a 4-all draw. They finished one point less than Indian Recreation Club, the team just above the relegation zone.

Next season, Taipo Lawn Bowls Club and Tuen Mun Sports Association will make their debut in the First Division.

The coming weekend will see the women playing their last game of the HKLBA Premier League season.

Currently Hong Kong Football Club, who is seeking their seventh consecutive Division One league title, is leading Shatin Sports Association by three points. Both teams will play their last game at home against mid-table teams.

At the bottom, there are only three points separating Club de Recreio, KBGC and CCC so anything could happen.

All games will start at 3:00pm this Saturday Nov 2.