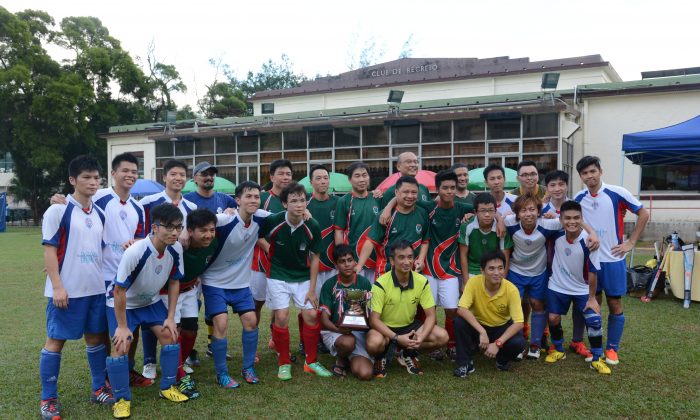 All together now: players of Cup Finalists KCC-C (in green) and Recreio-A pose for photos after the game, Sunday Aug 31, 2014. (Eddie So)
Hong Kong

Hockey—Centenary Tournament
By Eddie So

The Cup, hosted by Recreio, is of one of three trophies on offer at this preseason tournament held annually since 2006 to celebrate the club’s history as the first team to join the then established Hong Kong Hockey Association, more than 80 years ago.

The event played last weekend, saw invited teams battle it out for honours in both men’s and women’s categories on the club’s natural grass pitch. This pitch is one of only two natural playing surfaces to survive since the game turned to artificial pitches for more consistent play and its all weather benefits.

What made the final men’s Cup match between Recreio-A and KCC-C all the more exciting was that KCC is the only other club in Hong Kong to have its own (natural) grass pitch, so home advantage proved to have no bearing on the outcome. KCC-C were leading 2-0 at half time through goals from KCC’s Ben Poon and Richard Lee, who went on to score a second goal after the break to take them to a 3-0 lead.

The visitors then had their lead reduced when Recreio’s comeback with goals from Yip Wing-fu, followed by Bruce Wan and then Lai Kwok-fai put them within sight of the Cup only for KCC to break their hearts when they took the game 5-3 with additional goals by Ken Wong and Rohit Sujanani.

Gerry Xavier, Recreio’s hockey convener was overjoyed with the way his side fought back although they lost as the event proved to be fun for teams from lower divisions to play on Recreio’s natural grass surface.

“The main point of hosting this tournament is to maintain our friendship with all invited teams especially giving teams and their younger players a chance to play on natural grass,” said Xavier.