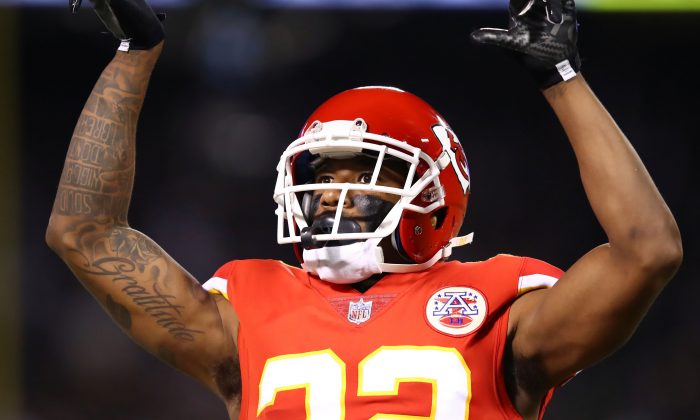 Marcus Peters #22 of the Kansas City Chiefs reacts after a play against the Oakland Raiders during their NFL game at Oakland-Alameda County Coliseum on October 19, 2017 in Oakland, Calif. (Photo by Ezra Shaw/Getty Images)
Entertainment News

SOURCE: Marcus Peters did not agree with this penalty call pic.twitter.com/AWgbhSWpYF

The Chiefs were penalized for defensive holding on a Jets’ crucial 2-point conversion play late in the fourth quarter as New York was up 36-31 over the Chiefs.

Peters then picked up the flag and threw it into the MetLife Stadium stands.

The cornerback left the field after the play but he wasn’t ejected for the move. Peters later returned to the field without wearing socks, as the CBS commentators noted.

Marcus Peters is back, with no socks. #Chiefs pic.twitter.com/zHfSgfNKwU

It’s unclear if the NFL will take action against Peters after reviewing his conduct.