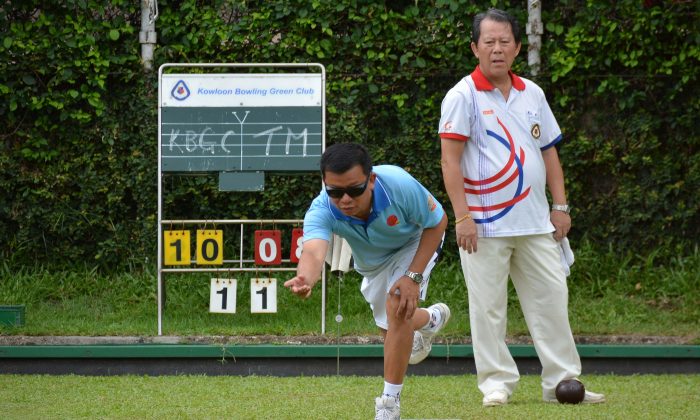 The best effort from Philip Chan of Tuen Mun Sports Association was not enough to stop James Cheng from Kowloon Bowling Green Club to win the game 23:11. (Stephanie Worth)
HK Lawn Bowls

KBGC Slips at Home to the Hand of Tuen Mun

Despite the KBGC team being four points behind the new leader Craigengower Cricket Club, they still have an advantage as they still have a game in hand, which was postponed a few weeks ago due to poor weather.

KBGC has won their two home games this season 8-0 so were expected to consolidate their lead with a good win. It was all rosy in the first few ends when all three KBGC rinks opened up an edge against the opponents but only James Cheng could maintain the advantage and prevailed with a comfortable 23:11 victory against Philip Chan.

Hong Kong international Stanley Lai played against Yu Hon Ming and led the game until the ninth end when things went downhill. He lost nine shots in the next four ends and never recovered from it. The game ended 15:17 with Lai losing by the same margin for the second consecutive week.

Now the pressure of winning the aggregate shots fell onto Heron Lau, finishing last, and playing against Boris Choi. Lau had been chasing the game since the sixth end and was losing nine shots with the last end to go. Should Lau win the last end, the game would finish tied on 4-4.

Lau’s team was holding a shot until Choi’s last bowl, but Choi drove the jack into the ditch and won two shots, just enough to surpass KBGC on the aggregate score to bring home six points.

CCC travelled to Taipo to face a team high in spirit after defeating Kowloon Cricket Club 8-0 at home the week before. The home advantage did not work this time and CCC came away with a comfortable 8-0 victory.

After the weekend, CCC was on 41 points, four more than KBGC. Tuen Mun climbed back to third with 31 points. Taipo remain at the bottom with 13 points only.

In Division two, City Lawn Bowls Club moved to the top of the table with an 8-0 victory at home against the B team of CCC. The Youth team are second, with three points less.

Women’s section
In the women’s Premier League, defending champion Hong Kong Football Club’s game was postponed till July 1 as some of the members were travelling with the Hong Kong team to the Australian Open. KBGC took the chance to defeat third-placed Seabird Sports Club and moved to the pole position. They now lead HKFC by four points but have played two games more.

At the bottom, Craigengower Cricket Club registered their first win of the season by beating bottom club United Service Recreation Club 6-2 but are still nine points away from safety.