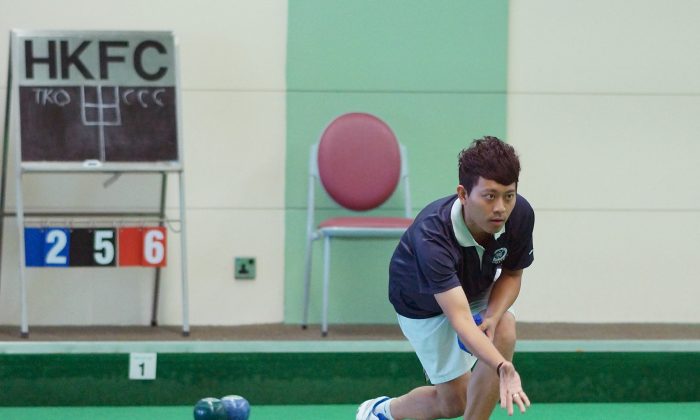 KBGC, who lead second-placed Kowloon Cricket Club (KCC) seven points but with an inferior shot difference, needed just two points in the last game of the season to ensure championship victory. They played away against already-relegated Taipo Lawn Bowls Club at the tricky Taipo Waterfront Park.

Meanwhile, KCC was playing at home against relegation-threatened Filipino Club, who was hovered just above the relegation zone by four points.

KBGC skipper Heron Lau, who is also chasing for his first champion team title in five years, said, “We expected KCC will win 8-0 so we need to take at least two points to avoid handing the title back to KCC.”

The game did not start well for KBGC as the rinks skipped by Macau International James Cheng and Hong Kong International Stanley Lai were losing throughout.

Lau’s rink was winning from the first end and at one stage was leading by 10 shots. “We then dropped a three on the 17th end and were only holding five shots into the last end. With the quality of the Taipo green anything can happen but lucky we maintained the momentum to hold the shots till the last bowl,” said Lau.

It proved that the KBGC’s analysis of the situation was correct as KCC duly dispatched Filipino Club 8-0 but was still unable to surpass the leader. However such win did have impact to the table as Filipino Club was condemned to Division 2 bowling next season as second-from-bottom Island Lawn Bowls Club performed the great escape act by taking a 6-2 victory at home to survive.

Looking back at the season, Lau said that it was a difficult season because they lost a few players to rival teams in recent year, “We never defended our title before but we played as a team to win some important match at the final stage, especially the away games at Tuen Mun and Craigengower Cricket Club. It is also lucky that our main rival KCC and CCC both dropped points at the crucial stage.

“We played as a team with tolerance and considerateness as we have to cover each other when things are not going well, these are the key to our success.

“There will be an even bigger challenge next year as our star player Stanley Lai will be transferred to CCC. I think we need to recruit a few quality players to fill the gap to maintain our status,” concluded Lau.

Joining Division 1 next season will be Division 2 champion Hong Kong Cricket Club, who have missed top flight league actions for more than 15 years. Hong Kong Youth Team will also join the elite division for the first time since its establishment in 2000.

This weekend will see the last game of the season for the women but focus will be on the relegation battle as Hong Kong Football Club has confirmed their ninth successive title after winning a postponed game in the mid-week. All games will be played at 3:00 this weekend.