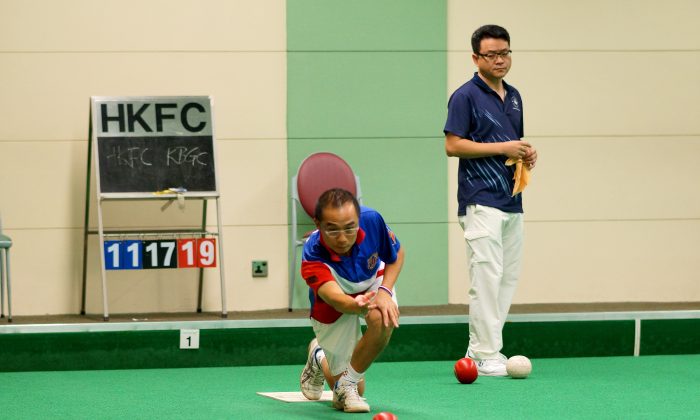 Having finished runners-up of the Premier League for the last 2 years, both at the hand of KCC, KBGC put up a strong team this season to try to break KCC’s monopoly. The two teams were level on points before last Saturday, but KCC held a superior shot differences.

KBGC played at Hong Kong Football Club’s indoor green at Sports Road in arguably one of the trickiest games of the season, but the victory came in much easier than expected.

The three KBGC rinks, which included 10 internationals of various countries and regions, faced little resistance from their HKFC counterpart and recorded wins of 21:11, 22:10 and 25:7. This triumph not just earned the team eight points, but the 40 shots accumulated also significantly reduced their deficit against the defending champion.

On the other hand, the KCC team, short of former Hong Kong number one Noel Kennedy suffered their second lost of the season in the hands of Taipo Lawn Bowls Club.

Of the three KCC rinks, only former-Hong Kong international Danny Ho came away with a victory of 23:13. The other rinks skipped by Mike Dowie and Chadwick Chen lost to their opponents 26:8 and 21:11 respectively.

After seven rounds, KBGC is leading the table with 44 points, followed by KCC’s 38. The HKFC that lost to KBGC in the weekend is anchored to the bottom with 17 points.

Women
In the women’s Premier League, Hong Kong Football Club continued their quest for the eighth consecutive title with a 5:3 win against bottom club Seabird Sports Club. They are now in third, two points behind the two leading clubs, KCC and Shatin Sports Association.