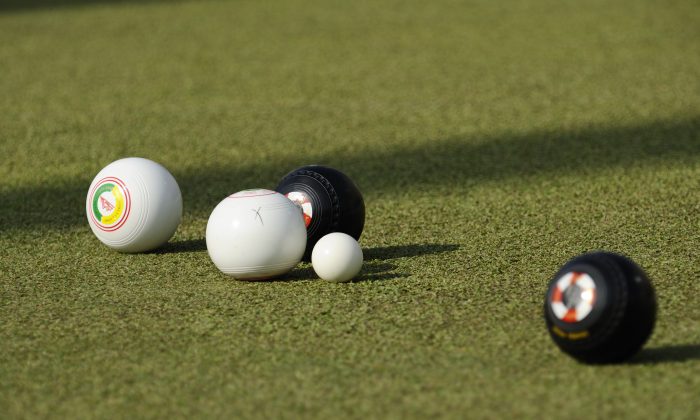 File photo: Lawn Bowls at its best: the cross on the white bowl indicates that it has touched the Jack (the small white ball). ‘Touchers’ still count if they are closest to the Jack if they are subsequently forced into the ditch surrounding the green, whereas ‘non-touchers’ don’t. (Stephanie Worth)
HK Lawn Bowls

HONG KONG—Defending champion Kowloon Bowling Green Club took a big step forward to the title when they narrowly edged out a strong Police team away from home last weekend, June 6.

KBGC, who has been leading the table since the start of the new season, only managed to beat two of the three Police rinks by two and three shots respectively. As Milo Lai from the Police could only defeat Hong Kong International Stanley Lai by two shots, KBGC won the aggregate score by three shots and took home 6 points.

The Police was playing their second last home game at the Police Officers Club as the clubhouse will be demolished in July to give way to the Wanchai Bypass and Island Eastern Corridor Link project. A new building will then be erected on the same site but this is not expected to be completed until 2020. According to the current plan, four lawn bowls rinks will be included in the new building. The team will play their second half games at the newly-constructed artificial green at the Police Sports and Recreation Club in Mongkok.

After the defeat, KCC is now lying third from the bottom, only eight points more than Taipo, who is still at the bottom.

While KBGC is standing firmly at their leadership position, record title holder Craigengower Cricket Club also maintained the pressure to the leader by taking eight points at home against newly promoted Tuen Mun Sports Club who, surprisingly, was level on point with CCC before the game.

After last weekend, KBGC is leading CCC by two points but have a game in hand. The bottom was occupied by Taipo and newly promoted Island Lawn Bowls Club.

In Division two, the Youth team is playing hard to get out of their blues of the last two seasons, when they finished third in successive seasons and missed out on the promotion to the top flight. They are now leading the chasing pack by five points but have played a game more.

Women’s section
In the women’s Premier League, defending champion Hong Kong Football Club also took a giant step towards their ninth consecutive title when they beat second placed Seabird Sports Club 6-2 at home. They now lead the table with four points and have a game in hand.

At the bottom of the division, Craigengower Cricket Club and United Service Recreation Club are yet to secure their first win of the season.