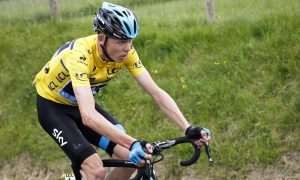 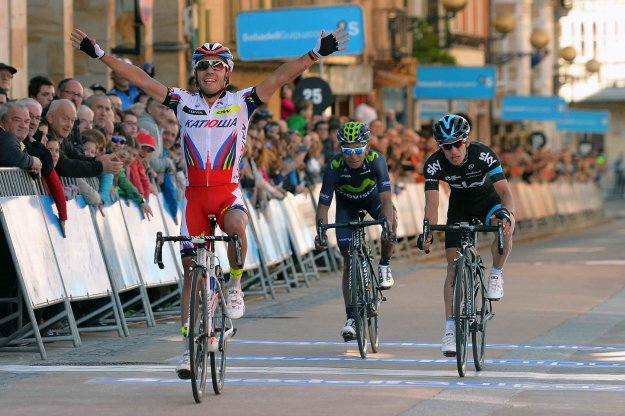 Joaquim “Purito” Rodriguez of Team Katusha celebrates winning Stage 3 of the Vuelta al Pais Vasco (Tour of the Basque Country) on April 8, 2015—his first win of the season. He repeated the feat with another summit victory in Stage 4, April 9, 20015, holding on to second in the General Classification. (www.katushateam.com)
Cycling

ARRATE, Spain—Joaquim Rodriguez made it back-to-back wins by claiming the fourth stage of the Tour of Basque Country on a downhill sprint on Thursday, while Sergio Henao of Colombia kept the leader’s jersey.

Henao crossed in a small group right behind Rodriguez to retain the overall lead on the same time as Rodriguez and Nairo Quintana at seven seconds ahead of Michele Scarponi in fourth.

Rodriguez overcame a difficult start to the stage that included falling behind early and then having to change his bike because of a punctured tire. But he recovered the lost time to rejoin the front of the peloton and still had enough to beat the other leaders to the line after getting the edge on a short descent following the category-one Alto de Uzartza summit near the end.

Henao had attacked the final ascent and opened up a small gap, but he was reeled in just after the rest crested the hilltop. And Rodriguez then proved more agile at coasting down to the finish line and complete the stage in 4 hours, 5 minutes, 10 seconds.

“Speed isn’t that important, it’s all about the aim,” the 35-year-old Rodriguez said.

The Spanish rider for Katusha got his first win in a year on Wednesday.

Henao still liked his chances despite not breaking the deadlock with Rodriguez and Quintana, a former race winner and the pre-race favorite.

“I tried to get some seconds and win the stage, and I didn’t end up with either,” Henao of Sky said. “But I felt good. My teammates controlled the race well and we have the lead. That’s what counts.”

The six-day race in northern Spain ends with an individual time trial on Saturday.