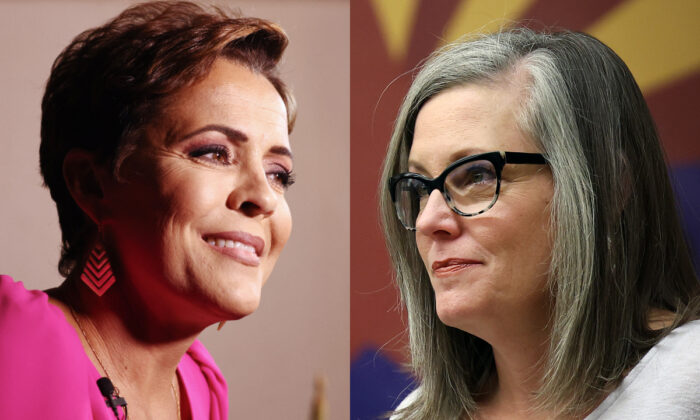 Arizona Gov. Katie Hobbs is asking a court to throw out Republican gubernatorial candidate Kari Lake’s bid to challenge the 2022 mid-term election because state law requires more evidence to show that “millions of Arizonans” were disenfranchised during the Nov. 8 election.

In a 317-page court filing (pdf) with the Arizona Appeals Court, Hobbs’s team said that a two-day trial in Maricopa County last month “gave Lake the opportunity to prove her speculative allegations during a two-day trial.” And, it added, “Despite seven witnesses, hundreds of declarants, and thousands of pages of exhibits, Lake failed to demonstrate any violations of Arizona law and offered no evidence that absent alleged violations the outcome of the election would have been different.”

“Lake’s arguments to the contrary depend on unsupported and untenable legal standards that would require elections to be thrown out upon mere speculation of election misconduct and conjecture regarding its supposed result,” it said. “But Arizona law requires much more to disenfranchise millions of Arizonans.”

Among other claims, Lake argued that printing errors disenfranchised Election Day voters during the Nov. 8 contest in Maricopa County. That day, county Supervisor Bill Gates and Recorder Stephen Richer confirmed the printing problems, telling voters to place their ballots in drop-boxes or find another place to vote.

“Lake did not establish that the Maricopa County defendants engaged in any misconduct regarding chain of custody documentation, let alone misconduct that would alter the results of the 2022 gubernatorial election,” they wrote.

The governor’s lawyers added that Lake’s witnesses in the trial couldn’t “identify a single voter” who couldn’t vote because of the “tabulator issues.” Instead, they argued that Lake relied on speculation of Richard Baris, an independent pollster, regarding how many people may or may not have cast a ballot.

Baris had testified he believes technical problems on Nov. 8 disenfranchised enough voters that it would have changed the outcome of the gubernatorial race. Maricopa Election Day voters, he said in court, trended Republican, adding that he suspects between 25,000 and 40,000 people who would normally have voted actually didn’t cast ballots as a result of the printer errors.

His estimate was primarily influenced by the number of people who began answering his exit polls but didn’t finish. If those deterred voters cast their ballots, “it would be significant enough to change the leader of the race,” Baris told the court.

“There were widespread issues and that deterred people from voting” along with “long lines people couldn’t wait in,’’ he added. “Not everyone is so intense about politics that life can’t be put aside,’’ he added. “Life gets in the way.’’

Lawyers for Lake, a former television anchor, argued that Maricopa officials allegedly “admitted, after first denying, that illegally misconfigured ballots were injected into the election.” As a result, they contended that such actions caused “tabulators to reject tens of thousands of ballots.”

They’ve also said that “sworn testimony by whistleblowers employed by Maricopa” show that officials in Maricopa, the state’s most populous county, did not verify mail-in ballot signatures and didn’t keep the proper chain-of-custody for thousands of ballots, triggering “chaos” on Election Day.

The Arizona Court of Appeals earlier this month agreed to expedite Lake’s case to be heard by Feb. 1 rather than sometime in March. Earlier, the state Supreme Court denied her petition to transfer the case to the high court.

During an interview last week, Lake stated that her team has obtained more evidence. She did not elaborate.

“We have evidence that has come to light that is very shocking … . It is really shocking, the levels that they went to cheat. And I believe that when additional evidence comes out people will wake up. Even people who have been reluctant to accept that there’s any problem,” Lake said in a video that was posted to the Kari Lake War Room Twitter account.

Regarding elections in general, particularly the 2020 presidential election, she said, “Even though it was painful, it woke us up to the fact that we don’t really have elections; we have selections and that’s a very painful pill to swallow, but it’s one we have to swallow and deal with. Now we’re in the process of dealing with it and correcting it.”