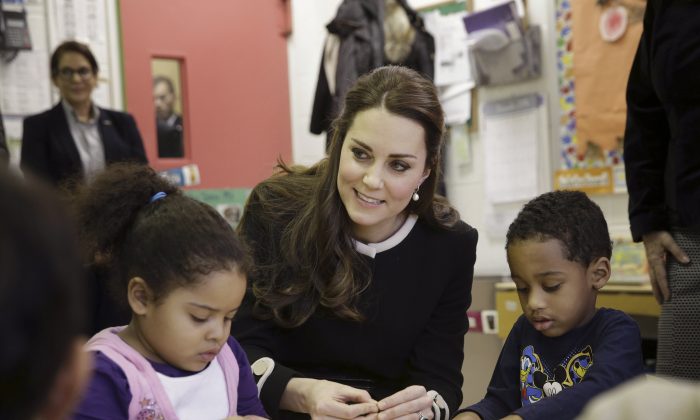 Kate, the Duchess of Cambridge, sits next to four-year-olds April, left, and Sammy in a pre-school class at the Northside Center for Childhood Development, Monday, Dec. 8, 2014 in New York. Kate and Prince William arrived in New York City on Sunday, their first official visit to the U.S. since a 2011 trip to California and their first taste of the Big Apple.(AP Photo/Seth Wenig, Pool)
New York

While William was in Washington meeting with President Barack Obama and discussing illegal trade in wildlife, his wife visited a venerable Harlem organization that provides mental health and educational services to about 3,300 children and families each year.

It was the couple’s first full day of a closely watched trip partly devoted to spotlighting conservation and education issues. The visit is taking the popular Duke and Duchess of Cambridge to New York and Washington for the first time and to the U.S. for an official visit for the first time since 2011.

“Very nice to meet you,” Kate told a classroom of special needs 3- and 4-year-olds who were embellishing picture frames with stickers at the Northside Center for Child Development.

“Do you know who’s coming to visit today,” an administrator asked as the duchess walked in.

After encouraging a boy named Sammy in his work, the duchess, who is expecting the couple’s second child, turned to April. “Where should I put this one?”

Kate said she was “really looking forward to the visit” as she and the city’s first lady, Chirlane McCray, arrived at the 68-year-old Northside Center. Founded by psychologists whose research on the effects of racial discrimination was cited in the Supreme Court’s 1954 decision to strike down public school segregation, it offers afterschool programs, psychotherapy, parent education and other services.

Dressed in a black coat by the British fashion brand Goat, Kate was greeted with cheers from a crowd of several dozen spectators as she stepped out of a black SUV and shook hands with McCray, who had been waiting for Kate in a purple made-in-New York coat by Nanette Lapore.

Aaron Victor and his wife, Crystal Pizarro, had waited almost an hour on a freezing, gray day with their 3-year-old daughter, London, to catch a glimpse of the duchess.

“It was a very good experience, and I’m glad she got to see her,” Pizarro said.

After the duchess and first lady met privately with some families, the two wrapped a few presents in the center’s gymnasium, with Kate joking that she hoped she’d be given a square package to tackle. Among the presents were two Dr. Seuss books (“Oh, the Places You’ll Go!” and “Green Eggs and Ham”), a singing flower, and a singing butterfly.

A sign declaring “WELCOME,” featured a heart filled with children’s handprints, with flags of the U.S. and UK adorning the sides.

An administrator, Rose Ann Harris, made a suggestion: “Does everybody agree she should be wrapping the princess?” she asked, grabbing a toy depicting Elsa from “Frozen.” “I’m going to have her wrap the princess.”

In fact, the duchess was to wrap the singing butterfly, a more manageably-sized gift. Ms. McCray would get the flower. “I was overruled,” Ms. Harris said.

“There are many places she could have picked in New York, and we’re very proud she visited us,” said Jennifer Hogan, a clinical intake coordinator at the center.

Meanwhile, William met at the White House with President Barack Obama and Vice President Joe Biden, and the duke went to speak at a World Bank conference about wildlife trafficking.

The royal couple’s schedule is packed with events including a visit to the National Sept. 11 Memorial and Museum, a reception highlighting conservation efforts with former Secretary of State Hillary Rodham Clinton and daughter Chelsea Clinton, a visit to showcase arts education at a youth organization, events celebrating British talent in creative fields in New York, a Cleveland Cavaliers-Brooklyn Nets game and a black-tie, up-to-$10,000-per-seat scholarship fundraiser for the University of St. Andrews.

The royals are visiting a city where thousands have protested over the past week to decry a grand jury’s decision not to indict a white police officer in the chokehold death of an unarmed black man, Eric Garner.

Even Cavaliers star LeBron James said Sunday that it was “possible” he might wear a shirt saying “I can’t breathe”—a rallying cry that has developed around Garner’s last words—before Monday’s game.

He added that playing with William and Kate in the audience would be “a huge honor.”