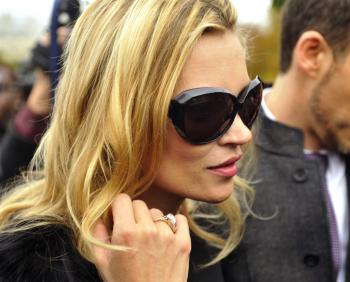 The 36-year-old supermodel apparently walked down the aisle barefoot, dressed in a see-through white gown, with a small gathering of friends and family watching on.

Moss’ daughter Lila Grace, 8, was one of the three ring bearers watching on as the happy couple exchanged their vows, according to the Telegraph.

Moss first started dating The Kills guitarist after a gig in 2007 when they were introduced by Sadie Frost, the Telegraph reported. They are believed to have got engaged in January when Hince proposed on Moss’ birthday.

Yet there are conflicting reports as to whether the wedding actually took place. The British celebrity is purported to have furiously denied the claims she and Hince married, according to tabloid the Daily Mail.

A close source who works for Moss apparently told the Mail Online she is 'definitely not married,’ adding “Any implication she is… is factually incorrect.”

Moss and Hince did spend a fortnight holidaying in Tuscany and the Aeolian Islands this summer, and the Mail published pictures of them on their break wearing identical wedding bands, and matching anchor tattoos on their wrists.