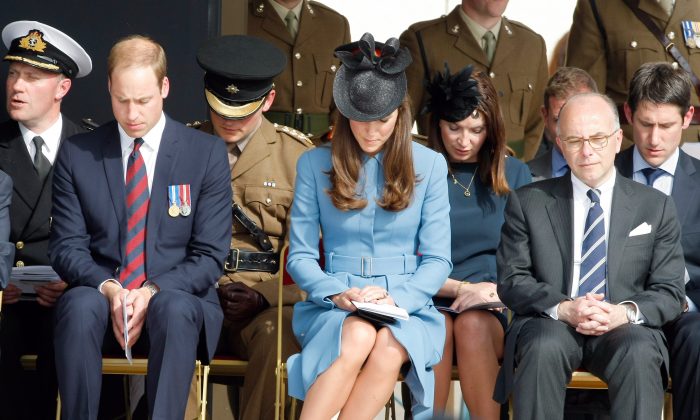 Prince William, Duke of Cambridge, and Kate the Duchess of Cambridge and French Interior Minister Bernard Cazeneuve, right, attend a remembrance ceremony, in Arromanches, France, Friday, June 6, 2014, as part of commemorations of the 70 anniversery of the D-Day landing. World leaders and veterans gathered by the beaches of Normandy on Friday to mark the 70th anniversary of World War Two's D-Day landings. (AP Photo/Claude Paris, Pool)
Entertainment

Kate Middleton, the Duchess of Cambridge, reportedly wants Prince George to start sailing. The report comes after a tabloid claimed she is pregnant with two girls

People Magazine reported that when she met with Olympic sailor Sir Ben Ainsle on Tuesday, he offered to take her and Prince George out on the water.

“The Duchess was very keen, but not for a couple of years yet – when he’s about 7 or 8,” Ainsle told People. He added that he would be happy to teach the child how to sail in a few years.

“According to Star Magazine’s latest cover story, Kate Middleton is pregnant with twin girls. Kate’s apparently been pregnant for the last 12 weeks, although she’s been keeping the pregnancy a secret thanks to her lack of morning sickness. Prince William is reportedly ecstatic with this new development, which also means that Prince George gets two more play pals come this fall,” reads a report from CelebrityDirtyLaundry.

However, a number of people are disputing the report.

NEW YORK (AP) — Chubby Checker wants the Rock and Roll Hall of Fame to know it’s time to induct him into its exclusive club before it’s too late.

“I don’t want to get in there when I’m 85 years old. I’ll tell them to drop dead, so you better do it quick while I’m still smiling,” Checker said Thursday.

Checker’s recording of “The Twist,” and subsequent “Let’s Twist Again” are considered among the most popular songs in the history of rock ‘n’ roll.

The 72-year-old recording artist equates a place in the Cleveland-based hall to the ability to sustain his career.

“If you put me in when I’m too old to make a living, then it’s no good for me to be in there.”

He added: “The Rolling Stones, they’re in there. The Beastie Boys are in there, they’re young. Hall and Oates were just in there and they’re still making money.”

He made the comments on the red carpet for the annual Songwriters Hall of Fame gala in New York where Checker performed “Let’s Twist Again” for the ASCAP Centennial celebration. A representative for the Rock Hall didn’t immediately return an email seeking comment.

At the Rock and Roll Hall of Fame induction ceremony in April, Daryl Hall mentioned that Hall and Oates was the first Philadelphia-based band to be inducted. And after mentioning Chubby Checker, he said: “Why isn’t he in?”

And he’s not alone. Before going into the ceremony, legendary songwriter Kenny Gamble — of the songwriting team Gamble and Huff — said he feels Checker is long overdue.

“I think Chubby Checker should be in the Rock and Roll Hall of Fame. He’s the only person I know to have the same song go to No. 1 twice.”