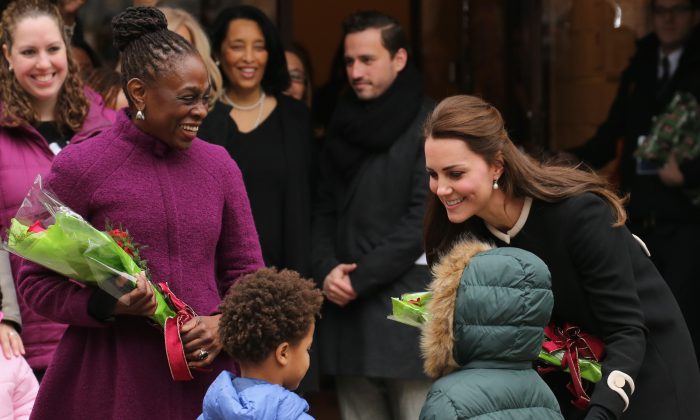 Kate Middleton Pregnancy: Photo of Her, William and LeBron Shows Breach in Protocol

LeBron James, Duchess Kate Middleton and Prince William were photographed together, but some are saying that the Cleveland Cavaliers forward and four-time NBA MVP violated official protocol.

The photo shows James posing with his arm around Kate, which appeared to surprise her.

Before the pose, James wrote on Instagram: “This very moment will be forever remembered and put up in my house. It’s all good and all smiles on this side.”

He also said, “Wow what an Honor! This game has brought me so much and I’ll never take it for granted! The King.”

There’s protocol about touching members of the British royal family.

As the BBC noted in 2011, “When meeting a royal, there are rules about who can speak first, where to look, what to call them, how you should stand and when you should sit. It is a mysterious business to the uninitiated.”

“But it stems from a time when monarchs were accorded an almost divine status and had to be treated accordingly.”

Dr Kate Williams, a historian at London’s Royal Holloway university, said that during medieval times, “monarchs were divinely appointed to rule by God, so they were kind of seen as gods, so they demanded to be treated as gods.”

There was a breach of protocol when first lady Michelle Obama put her arm around Queen Elizabeth II in 2009.

The journey to New York City and Washington, DC is the first official US trip for Kate and William.

They will also visit the Sept. 11 Memorial and Museum, an arts education center, and a black-tie fundraiser for their alma matter, the University of St. Andrews.