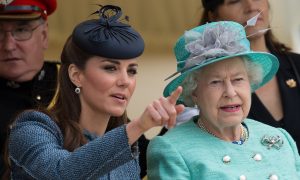 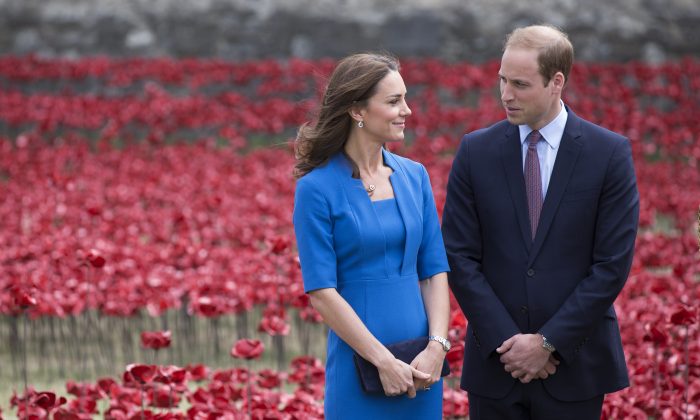 Catherine, Duchess of Cambridge and Prince William, Duke of Cambridge walk through an installation entitled 'Blood Swept Lands and Seas of Red' by artist Paul Cummins, made up of 888,246 ceramic poppies in the moat of the Tower of London, to commemorate the First World War on August 5, 2014 in London, England. (Oli Scarff/Getty Images)
Royals

Kate Middleton, the Duchess of Cambridge, had an ultrasound during her 12-week pregnancy checkup and, according to a tabloid report on Thursday, she’ll be having a girl. The same report said that she recently collapsed and was discovered on the floor by an assistant.

Middleton, 32, had a checkup with royal physician, Dr. Alan Farthing, in mid-October, and he told her the news about her pregnancy, reported the National Enquirer.

Citing its sources, the tabloid said the baby’s gender was confirmed via a prenatal DNA test.

“Both William and Kate are overjoyed,” a royal family insider told the Enquirer.

It’s worth noting that the Enquirer has had a spotty record with some of its reporting, but has broken stories–like the John Edwards affair scandal a few years ago.

The report then goes on to quote Jessica Hay, who was a friend of Middleton. “William and Kate had talked endlessly about how they’d love to have a little girl,” she said. “They were initially planning to wait until the baby was born and let the gender be a surprise.”

MORE: Pippa Middleton to Get Offer to Become a Correspondent for NBC’s Today Show, Report Says

However, when Hay made comments about Kate’s pregnancy a few months ago, the palace disputed them and said Kate hasn’t spoken with Hay, described as a childhood friend, in “many years.”

The Enquirer also made more claims Kate’s morning sickness, known as hyperemesis gravidarum, which has left her not feeling well.

She collapsed on the floor recently, but the tabloid did not say exactly when. A doctor on call rushed to Kate’s aid before she was transported to a medical facility 20 minutes away, a source said.

“A checkup showed Kate was fine and so was the baby,” the insider claimed. “But it was a real scare and now William has ordered that Kate be watched closely. She’s back on her feet, but she’s not 100 percent.”

The source added: “But she keeps smiling to herself – excited that the entire family’s dreams have come true.”

Kate and William will also make a public appearance at a Wales-Australia rugby match in Cardiff, reported the Mirror, which also said she’s “recovering from severe morning sickness.”

She and the prince will also visit the Valero Pembroke Refinery in southwestern Wales.

A few weeks ago, Kate met with Singapore’s president, telling his wife she was “really looking forward to getting out of the house” after her morning sickness.

Next page: See Most recent Photos of Kate and William