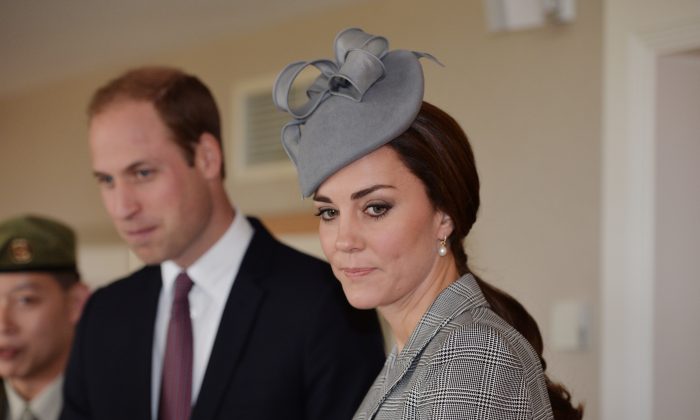 Britain's Prince William, left, and his wife, Kate, Duchess of Cambridge, wait to greet the President of Singapore, Tony Tan Keng Yam, and his wife Mary, at an hotel in London, on the first day of his four-day state visit to the Britain, Tuesday, Oct. 21, 2014. (AP Photo/Anthony Devlin, Pool)
Royals

Kate Middleton, the Duchess of Cambridge, was linked to a security scare recently after members her royal protection squad swarmed and then surrounded a car that stopped outside of her mother’s house where Kate is staying.

UK father Adam De Marco told the Telegraph that armed officers surrounded his car after he tried to change a flat tire near her mother’s home. De Marco and his family were heading to Bucklebury Farm Park in Berkshire, which is near where Middleton’s parents, Michael and Carole Middleton, reside.

Kate has been staying at her parents’ home in recent weeks as she recovers from severe morning sickness due to her pregnancy.

De Marco said that his BMW was stopped and officers drew their guns before they realized he and his family were not a threat and then helped him repair his tire.

“We got the flat tyre as we drove Mia to the farm park, where children can play on the swings and look at the pigs and other animals,” he said.

“I went to put on the spare, but then realized I was missing the special screw-nut you need with a BMW to remove the wheel – it’s meant to stop thieves. I was in a quandary, wondering what to do…then all of a sudden we found ourselves surrounded by policemen who were carrying guns.”

“I didn’t twig at first that they were connected with the Royal Family, but one of them mentioned Prince William and the Middletons’ house nearby and we put two and two together,” he added.

Kate is about 14 weeks pregnant and has been dealing with a rare form of morning sickness including severe vomiting.

Meanwhile, there’s been rumors that Queen Elizabeth II thinks that the Duchess is too skinny.

Some websites have claimed that the Queen thinks Middleton is “heading down the same anorexic path” as actress Angelina Jolie, who received an award from the monarch a few days ago.

“Apparently Elizabeth seeing super skinny Angelina Jolie when she awarded her the honorary Dame title recently was a shock for the monarch and got her to worrying about Kate Middleton’s weight,” reads a report from the hit-or-miss gossip site Celeb Dirty Laundry.

“Apparently nothing bothers Queen Elizabeth more than a woman who doesn’t take care of herself. Insiders have revealed on more than one occasion that the Queen thinks Kate Middleton is too skinny, and is concerned she has an eating disorder. Now that Kate is pregnant with she and Prince William’s second child, Queen Elizabeth has the royal team on high alert to make sure Kate is eating properly. It’s one thing for Kate Middleton to starve herself – but Elizabeth will not have her starving her unborn [great] grandchild,” the report adds.