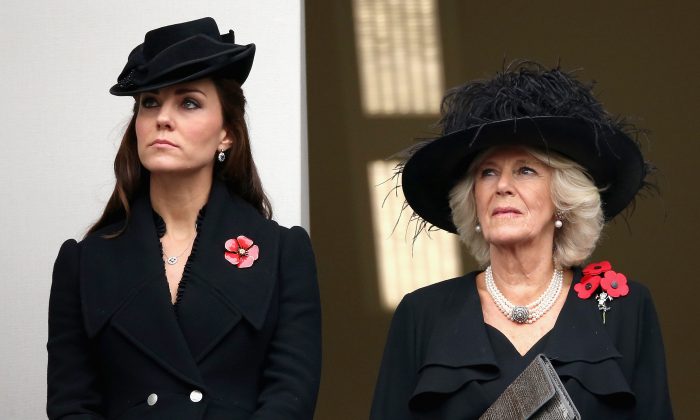 Kate Middleton, Duchess of Cambridge and Camilla, Duchess of Cornwall attend the annual Remembrance Sunday Service at the Cenotaph on Whitehall on November 9, 2014 in London, United Kingdom. (Photo by Chris Jackson/Getty Images)
Europe

Kate Middleton has a “touchy relationship” with Queen Elizabeth and is fighting with her over several issues, including Prince George, a new report claims.

The latest OK! magazine cover story says that the problems between the Duchess of Cambridge and the Queen partly stem from Kate and Prince William moving to Anmer Hall over the Queen’s objections.

“Kate stood her ground. She said, ‘I’m more comfortable at Anmer, and it’s a more relaxing place for us to raise George,'” a source said.

“There’s been some tension” over the rift, the source added.

Kate is also upset with how Queen treats Prince George.

“She’s said many times, ‘Mum treats her visits with him like a royal duty,’ as though he’s a prop for appearances rather than her cute little great-grandson!” a friend told OK!

“She recently said that she hopes the Queen will ‘lighten up’!”

However, Gossip Cop noted that the Queen gave the couple Anmer Hall as a gift and “it is NOT a source of tension.”

The magazine also said that there’s been a fight between the royals over Kate’s desire to host a Christmas Eve party for family and friends.

“I’m not bending over backward for the Queen. I’ll host a party whenever I want,” Kate reportedly told friends.

But a source close to the situation told the Cop blog that “tabloid allegations about the family continue to be false.”

OK! also said that Kate and William won’t be sharing the gender of the second baby until the royal announcement, and that they’re painted the baby’s bedroom neutral.

“She says she wants to keep it a surprise, just as she did with George,” the source said.

The magazine also says that Kate has been having girlfriends over to Anmer, including for “a very informal housewarming party.”

And despite the drama, a close friend told the magazine that Kate is “so happy right now.”

“She’s recently said she’s ‘overjoyed’ about having another baby,” the friend added.