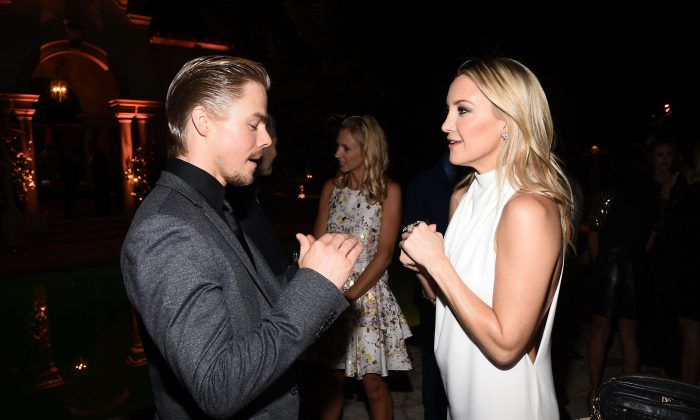 Kate Hudson was spotted kissing Derek Hough after it was announced that she split with former fiance Matt Bellamy.

Sources confirmed the interaction with Us Weekly, while adding that the pair enjoyed dinner and drinks at the establishment, and stayed past closing.

The actress was last seen with Bellamy, 36, at Goldie Hawn’s Love In For Kids event in LA on November 21.

Hough was pictured with Hudson at the same event.

X17 first reported that Hudson and Bellamy split, because Hudson was unsure whether the marriage would work.

“Kate doesn’t ever want to get divorced again, and she wasn’t sure marriage with Matt was the right choice. There is still a lot of love there, and they plan to amicably co-parent their son. Who knows what the future holds for them, but right now it’s not a wedding,” a source said.

Hudson and Bellamy, of the band Muse, were engaged back in April 2011, around the time they welcomed son Bingham into the world.

Hudson revealed in an interview last year that she was spending time with Hough, who is best known for his role as a professional dancer on ABC hit Dancing With the Stars.

“My heart is really in contemporary jazz, but lately I’ve been ballroom dancing with Derek Hough,” she told Shape magazine.

Besides interacting with Hough at her mother’s recent event, Hudson (and Bellamy) were at Hough’s Halloween party.

But a source told E! News that Hough has recently been dating dancer Justene Alpert, and that she spent time with him over Thanksgiving.

Hough has also been linked to Bethany Mota, who was his partner in the most recent DWTS season, though nothing was ever confirmed between the pair.