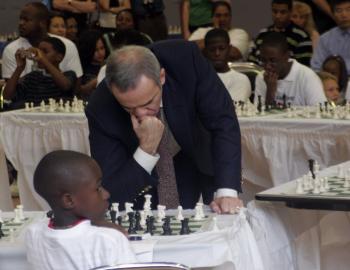 Kasparov, who was born in Azerbaijan, won the Soviet championship at 18 years old and went on to become the youngest ever World Chess Champion in 1985. Kasparov retired in 2005 with the all time highest chess rating.

But on Sunday afternoon, Kasparov tested his mettle against Harlem’s finest young chess minds in a basement gymnasium on 125th St. Kasparov moved decisively between five tables with four chess players at each table.

A crowd of several hundred spectators quietly watched the match; parents of the young chess players could be seen proudly cheering their prodigies with silent fist pumps and wide grins.

Gerald Times, Director of the Chess program at HCZ said the majority of the kids are from chess programs at the various HCZ sites, community centers, charter schools, and area schools in the district, 13 of the students were from HCZ, and seven kids came from competitive chess programs in surrounding areas. The young players were arranged at the tournament tables according to their skill level, or chess rating.  All are accomplished chess players.

“There are no beginners playing Kasparov, we wanted to have the most competitive group play him” said Times.

“Boys and girls in our chess program have been placing at the top of city, state and national tournaments,” said Geoffrey Canada, President and CEO of the Harlem Children’s Zone, in a press release. “But more importantly, these kids are giving their minds an incredible workout, developing important analytical and organizational skills.”

This was Kasparov’s first time at the HCZ. Sunday’s tournament was arranged through an existing relationship between HCZ and the Kasparov Foundation, a non-profit organization that promotes the study of chess as a cognitive learning tool in curricular classes and after-school programs for elementary, middle and high schools.

When asked who was the most difficult to play against, Kasparov answered that it was the youngest player, Rochelle Bellantyne.  It was apparent that Bellantyne did have Kasparov sweating; when he stopped at her board, he put his hands in his pocket, then put his hand on the side of his face… then leaned against the table. In the end Kasparov defeated his young challenger.

But can you imagine, 13 years old against the best in the world…maybe next year Mr. Kasparov.

Harlem Children’s Zone, Inc., is an internationally renowned not-for-profit, offering education, social-service and community-building services to children and families in Central Harlem. The organization’s work has been profiled by The New York Times, 60 Minutes, The Oprah Winfrey Show, The Today Show, the Associated Press and The Charlie Rose Show, among others.