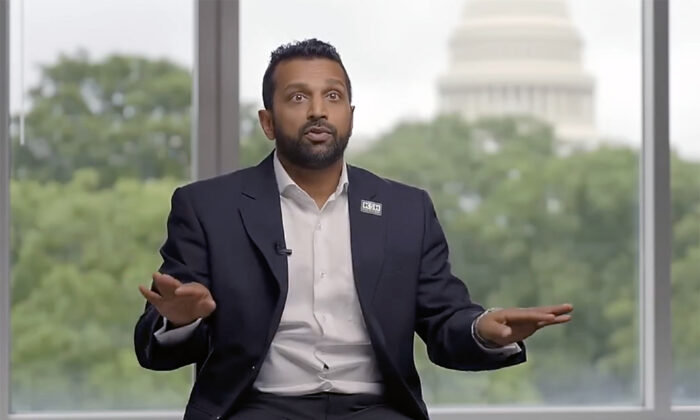 “Today marks another vicious attack from DOJ/FBI who intentionally jeopardized my safety by un-redacting my name in the most reviewed search warrant in the history of the United States,” Patel said in a post on Truth Social, former President Donald Trump’s social media platform.

The Department of Justice (DOJ) and the FBI did not respond to requests for comment.

Patel, who currently hosts an EpochTV program, is one of only two people identified by name in the affidavit, most of which was redacted. The other is Rep. Carolyn Maloney (D-N.Y.), who was referenced because she was told by the U.S. archivist earlier this year details about materials the archivist received from Mar-a-Lago, Trump’s estate.

Other figures were discussed but not named, including the archivist, a Department of Justice lawyer, and a Trump lawyer. Other names were redacted, including the name of the FBI agent who wrote the affidavit.

U.S. Magistrate Judge Bruce Reinhart approved the warrant based on the affidavit, a sworn statement. The warrant was executed at Mar-a-Lago on Aug. 8. The affidavit was made public with redactions on orders from Reinhart.

The inclusion of Patel’s name drew widespread attention, including from former FBI official Peter Strzok, whose display of animus toward Trump in text messages led to his termination.

Patel, who was a key part of the congressional investigation that uncovered how Hillary Clinton’s campaign and other Democrats funded the anti-Trump dossier, said that the DOJ and FBI make up a “cartel of corruption inside of our government” that “is so devoid of concern about national security, they could not be bothered to see the judge in-person.”

He was referring to how Reinhart received the warrant affidavit and application via WhatsApp, a communication tool owned by Meta, which also owns Facebook.

“The DOJ is on the line for my security with their dangerous actions,” Patel added, before revealing the FBI has been investigating death threats that were made against him.

The portion in the affidavit mentioning Patel had the FBI author saying he or she was “aware” of an article published on Breitbart on May 5, which reported on an interview with Patel in which he said that reports that classified documents were found at Mar-a-Lago were misleading.

Patel said that Trump had declassified the materials using his authority as president.

Trump has also said he declassified the materials.

The FBI agent’s response to Patel’s claim was redacted.

Government officials said they redacted so much due to a need to protect the identities of witnesses and government agents, along with a desire to protect the integrity of the investigation into Trump.

Officials say Trump violated several laws, including one governing the use of national defense information.

The specific reasons for most of the redactions were largely redacted, drawing criticism from Trump’s team.