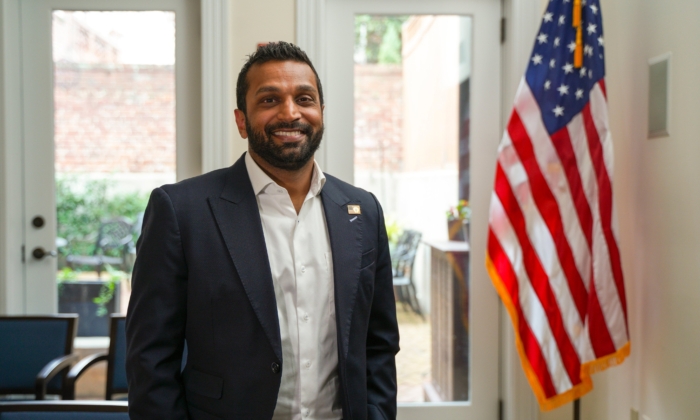 Ivan Pentchoukov
Ivan has reported for The Epoch Times on a variety of topics since 2011.
View profile
Follow
and Jan Jekielek

Only two sentences in the 2,700-word article by Ignatius deal directly with the leaking allegation. The rest of the piece traverses Patel’s work for the U.S. government between 2017 and 2020, describing him as a “key operative in [President Donald] Trump’s battle with the intelligence community.”

“The sources said the investigation resulted from a complaint made this year by an intelligence agency, but wouldn’t provide additional details,” Ignatius wrote.

In an interview with The Epoch Times, Patel denied the claims by Ignatius and said the DOJ hasn’t approached him. He also pointed to Ignatius’s role in Crossfire Hurricane, the bias-tainted investigation of the Trump campaign that featured multiple spies targeting Trump associates as well as intrusive electronic surveillance based on botched secret court warrants.

“It’s the height of hypocrisy and irony that the individual who wrote that piece is the one that intentionally and knowingly published classified information … to instigate the massive Russia hoax,” Patel said, referring to the Jan. 12, 2017, column in which Ignatius cited an anonymous U.S. government official saying that Trump’s incoming national security adviser Michael Flynn spoke to Russian Ambassador Sergey Kislyak on the day the Obama administration announced sanctions against Russia.

The Flynn–Kislyak call was at the center of the prosecution of Flynn by special counsel Robert Mueller. Flynn initially pleaded guilty to lying to the FBI about the call, but later withdrew his plea. Flynn’s legal saga unearthed troves of evidence of malfeasance by both the FBI and the special counsel’s office. The special agent who handled the case later said it was an operation to “get Trump.”

“Fast forward five years later and he writes—not an actual news story but an op-ed in the Washington Post, where he couldn’t even get it published as actual news—that says that I possibly may be under investigation for leaking classified information,” Patel said.

“All that [does] is allow the fake news media to jump on and say Kash Patel’s under investigation,” Patel said. “If the Department of Justice thinks that’s actually true, well then bring it on, because I know the truth and I’ve never leaked classified information in my life. Beyond that, I’m in discussions with my lawyer as to what to do with the Washington Post. And we’ll see what he decides.”

Patel’s most significant contribution to the revelations about Crossfire Hurricane came through his work with the House Permanent Select Committee on Intelligence (HPSCI). Patel’s team uncovered that the Hillary Clinton 2016 presidential campaign funded the compilation of a dossier of unsubstantiated claims about Trump that played a crucial role in the FBI’s decision to obtain a Foreign Intelligence Surveillance Act (FISA) warrant to spy on former Trump campaign foreign policy adviser Carter Page. The dossier was authored by former British intelligence officer Christopher Steele, who was simultaneously working for a Russian billionaire with ties to the Kremlin.

The FBI used portions of the dossier in its applications for warrants to spy on Page, despite knowing that Steele was funded by Clinton, that Steele had an overt bias against Trump, and after it had terminated its relationship with him over leaks to the media. Patel’s findings were first published in the so-called Nunes memo and later in the HPSCI report on Russian active measures.

While the report and the memo were maligned by the Democrats and establishment media, Patel and the committee were vindicated by the Department of Justice Office of Inspector General, which confirmed the main points of the report and unearthed severe errors and omissions in the FISA applications used to spy on Page. An FBI lawyer who played a key role in the Mueller investigation was eventually sentenced to probation for forging an email used in the preparation of one of the warrant applications.