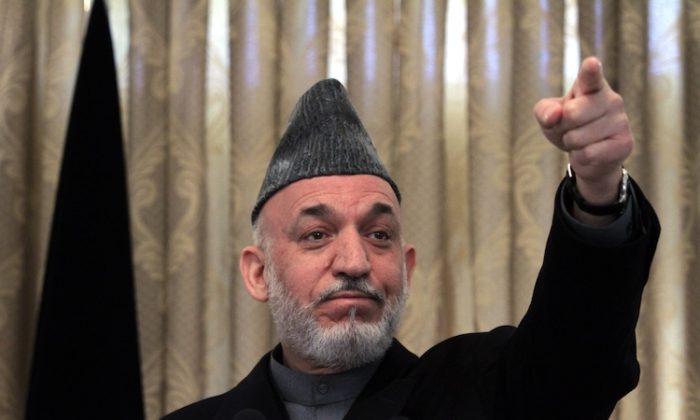 On Monday, Afghan President Hamid Karzai, seen here at a press conference in Kabul on Feb. 8, 2011, ascribed blame for a wave of militant attacks the day before on poor NATO intelligence. (Majid Saeedi/Getty Images)
World

Afghan President Hamid Karzai said Sunday’s coordinated terrorist attacks in several provinces, which killed 15 people, including 11 security forces, and injured scores more, was due to a failure in NATO intelligence.

In a statement on Monday, Karzai foisted most of the blame for the gap in security on the 28-nation military alliance.

Suicide attackers in Kabul, Logar, and Paktia provinces were able to infiltrate because of an “intelligence failure for us and especially NATO,” Karzai’s statement reads. He called for a full investigation into the matter.

At the same time, the Afghan head of state praised the country’s security forces.

“Afghan security forces proudly displayed their ability, which was itself an assurance to the people that they are capable of protecting their country,” Karzai said.

In an assault that lasted 18 hours, militants attacked the the Parliament building and government district in central Kabul, where numerous embassies are located. As many as 35 civilians were taken hostage in the siege, said officials, according to Afghanistan’s TOLOnews.

The Taliban claimed responsibility for the Kabul attack, saying it was part of their “spring offensive,” the news website said.

“We do all we can to prevent such attacks in co-ordination with the Afghan security forces and the Afghan intelligence services, but of course you can never give a 100 percent guarantee,” he said.