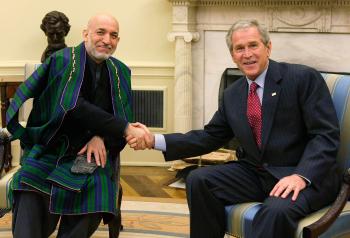 Karzai and Bush Meet Officially for the Last Time

WASHINGTON, D.C.-Afghan President Hamid Karzai stressed the importance of the involvement of the regional and international communities in destroying terrorist sanctuaries, and requested for more resources for the training of the Afghan army and police forces. He spoke at the 63rd United Nations General Assembly in New York on Sept. 24, and held a press conference with President Bush at the White House two days later.

President Karzai said that terrorism will not disappear if terrorists continue to have secure sanctuaries. According to him, the elimination of terrorist activities will only be possible with the cooperation and engagement of Pakistan and the international community.

"Afghanistan stands ready to take several steps for each single step that Pakistan will take to address the challenge of radicalism and terrorism," President Karzai told the U.N. gathering.

He also urged the international leaders at the U.N. General Assembly to provide more help in training the Afghan police force and the army so they can share more military responsibilities in order to eliminate civilian deaths caused by U.S. and NATO military actions that created anger among Afghan people.

It is reported to date that some 3,000 innocent civilians have been killed in Afghanistan. "Security situation is worse than it was three months ago," United Nations special envoy Kai Eide told Reuters in an interview at the U.N. General Assembly.

In the last leg of his trip to the United States, President Karzai met with President George W.  Bush on Sept. 26, which marked their last official meeting in the White House.

"I admire your leadership and your determination, and let you know that the United States is committed to the people of Afghanistan, and we will stand by your side and do the hard work necessary to achieve our objective. Our objective is for you to become a thriving democracy,” said President Bush.

“Our objective is to deny al-Qaeda and other extremists a safe heaven or a base from which to launch their murderous attacks," said President Bush at the press conference.

During the meeting, Bush and Karzai participated in a video conference with the United States provisional reconstruction team (PRTs) leaders, Afghan governors in eastern Afghanistan, and representatives from the National Guard's agriculture development team.

There are a total of 26 PRTs lead by United States as well as NATO allies in Afghanistan. The video conference was followed by a press conference in which President Bush expressed his appreciation to the challenges the PRTs face on the ground in Afghanistan.

"My reaction to our conversation is one of promise and progress. No question, it's difficult, but if you listen to the people on the ground, working with the citizen of Afghanistan on matters of agriculture, education or infrastructure, you will understand why I said there is progress and promise and hope, and so I want to thank my fellow citizens, Mr. President, in your presence,  for their sacrifice and service," said President Bush who addressed Karzai, attending U.S. officials, members of PRTs, and the reporters.

President Bush also said that economic development, education, and infrastructure with security are the central strategies of counterinsurgency "to help this young democracy not to survive, but thrive so that [Afghanistan] never becomes a safe haven for those who will do us harm again."

Toward the end of his White House address, President Bush reminisced the time the special forces rescued Hamid Karzai during the liberation of Afghanistan and how President Karzai served his country then and now.

In turn, President Karzai expressed his gratitude to President Bush for his hospitality at the White House. Karzai stressed the main reason he paid this visit to the White House. "My trip this time to Washington is for one reason: to thank you and through you, the American people, for all you did for Afghanistan." Karzai said Bush has made a huge difference through his personal commitment to the betterment of Afghan lives, security, democracy, education, and health.

However, he also talked about the assumed lethargic and slow period of progress in Afghanistan. President Karzai said, "at times this span of 7 years, we have come across issues that gave the feeling that things are slowing down. That is not the impression that the Afghans have. Afghanistan has made progress that we would not have been able to make in 50 years or 60 years what we have done in [the] past six or seven years."

For example, he mentioned the increase of national reserve from $180 million to over $3.5 billion since 2003, and the lives of 85 thousand infants and children saved each year.

President Karzai also admitted Afghanistan faces many challenges even though life is better. "Of course, we have challenges, and the challenges continue to face us as we move ahead. Success is already there. Success will be completed."

In their last official press conference at the White House, Karzai concluded with another heartfelt appreciation to Bush: "It is an honor to have associated with you to have had your friendship, support and patience with me. I would like you to remember that Afghanistan will remember you tremendously, nicely, with affection, and you are there in our memory, in a golden page. Come visit us so we can show [Afghanistan] to you in a manner that we do traditionally in Afghanistan," said Karzai.

Karsai jokingly confessed to his occasional bouts of frustration with Bush over the years: "I have yelled at times. I have been angry at times. But you have always been smiling and generous. Thank you," Karzai told Bush and the reporters.

Shakila Khalje is a Washington, D.C. based freelance journalist.