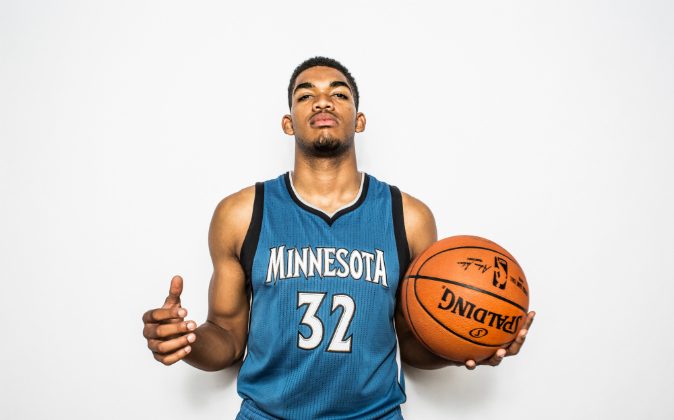 Karl-Anthony Towns #32 of the Minnesota Timberwolves poses for a portrait during the 2015 NBA rookie photo shoot on August 8, 2015 at the Madison Square Garden Training Facility in Tarrytown, New York. (Photo by Nick Laham/Getty Images)
NBA

NBA player Karl-Anthony Towns was the No. 1 overall draft pick in last year’s draft and was crowned on Monday, May 16, as the league’s top rookie.

The Minnesota Timberwolves center was unanimously chosen—received all 130 votes—by sportswriters and broadcasters in the United States and Canada as this year’s best rookie. He is the fifth rookie to be chosen unanimously in NBA history.

His presence resulted in helping the Northwestern division team win 13 more games than it did last season.

“It’s an honor to be named Rookie of the Year by the media,” Towns said. “I owe a lot to our coaches and my teammates for their support throughout the year. I intend to work hard on my craft to improve my game for next season and help our team challenge for a playoff spot.”

Last year fellow teammate, Andrew Wiggins won the Eddie Gottlieb Trophy. The back to back win marks the first time since the 1973 and 1974 season when Bob McAdoo and Ernie DiGregorio won it with the Buffalo Braves.

As for Towns, the Kentucky big man had a consistent and dominating season over his first-year peers. He averaged 18.3 points, 10.5 rebounds, and 1.7 blocks per game and played in all 82 games this season. His presence resulted in helping the Northwestern division team win 13 more games than it did last season.

“He’s going to be a Hall of Famer in this league,” Oklahoma City star Kevin Durant said of the 20-year-old.

Besides picking up the trophy, Kia Motors America donated a brand new Sorento CUV to the Minnesota Chapter of the Leukemia & Lymphoma Society on Towns’ behalf. Towns paid tribute to coach Flip Saunders, who died of cancer last year. Saunders was the Timberwolves coach when Towns was selected.