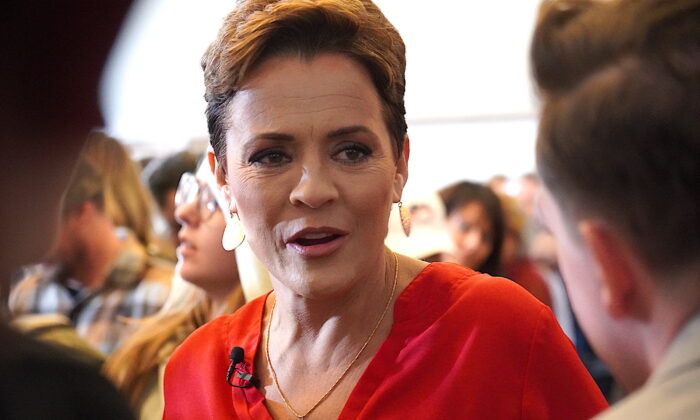 Arizona GOP candidate Kari Lake filed a petition to transfer her election case from Maricopa County to the Arizona Supreme Court over the past weekend, coming as Democrat Katie Hobbs was sworn in as governor of Arizona in a ceremony.

Lake’s petition claims that “evidence put forward in this case, including the changing and conflicting testimony of Maricopa officials, and sworn testimony by whistleblowers employed by Maricopa” show that Maricopa County did not verify mail-in ballot signatures, caused “chaos” on Election Day, and did not keep the chain of custody for hundreds of thousands of voters.

Last month, after a two-day trial, Maricopa County Judge Peter Thompson dismissed Lake’s lawsuit and said she did not prove Maricopa County officials engaged in any kind of misconduct during the 2022 midterm election.

On Nov. 8, top Maricopa County officials—County Supervisor Bill Gates and Recorder Stephen Richer—confirmed there were ballot printer problems at dozens of polling locations. Her lawyers argued that those officials allegedly “admitted, after first denying, that illegally misconfigured ballots were injected into the election” and caused “tabulators to reject tens of thousands of ballots” which they said “disproportionally” impacted Republican voters on Election Day, according to Lake’s new petition to the Supreme Court.

Lake said that those alleged issues and discrepancies would exceed the 17,000-vote margin between Lake and Hobbs and called on the Arizona high court to “restore trust” in statewide elections.

On Dec. 24, Thompson said he found that Lake’s team did not present enough evidence of misconduct by Maricopa County officials to overturn the county’s election results. The judge also previously dismissed eight other counts that Lake had alleged in her lawsuit, writing they did not constitute the proper grounds to contest an election under state law.

During the trial, Lake’s attorneys pointed to a witness who found that 14 of 15 duplicate ballots he had inspected on their behalf had 19-inch images of the ballot printed on 20-inch paper, meaning the ballots wouldn’t be read by a tabulator. The witness testified that such a change would have required a change to printer configurations, although election officials disputed those assertions.

Lake also called on pollster Richard Baris, who told the court that he believes technical problems at polling places had disenfranchised enough voters that it would have changed the outcome of the race in Lake’s favor. Baris noted that Election Day voters in Maricopa mostly trended Republican.

Baris stated that 25,000 to 40,000 people who would normally have voted actually didn’t cast ballots as a result of Election Day problems, saying that his estimate was primarily influenced by the number of people who started answering his exit poll but didn’t finish the process.

Meanwhile, Hobbs and other new top Arizona officials were sworn into office on Monday during a ceremony in the Capitol Executive Tower in Phoenix.

“Today marks a new chapter for Arizona,” Hobbs, Arizona’s former secretary of state, said Monday during the event. “As we look forward to a brighter future, I pledge that the needs of Arizonans—not partisan politics—will always come first. I will work with Republicans, Democrats, and Independents to tackle our state’s biggest challenges—fully funding our public schools, securing our state’s water future, ensuring reproductive freedom, making Arizona more affordable, and so much more.”

In one of her first official actions, Hobbs signed an executive order setting in motion a process to update the state’s policies barring discrimination in state employment and contracting. Hobbs is adding new protections based on gender identity, political affiliation, military service or veteran status, marital status, and other characteristics.

As governor, she’ll have to work with a House and Senate narrowly controlled by Republicans. The new legislature convenes for the first time next week.

Also formally taking office Monday were Democrats Adrian Fontes as secretary of state and Kris Mayes as attorney general, both of whom defeated Republicans who challenged their losses in court. Mayes’s 280-vote victory was among the closest statewide races in Arizona history.

Following Hobbs’s swearing-in ceremony, Lake did not indicate she would concede. On Twitter, she alleged Monday that Republican and Democrat officials “stole the Arizona election,” accusing them of being part of a “uniparty.”