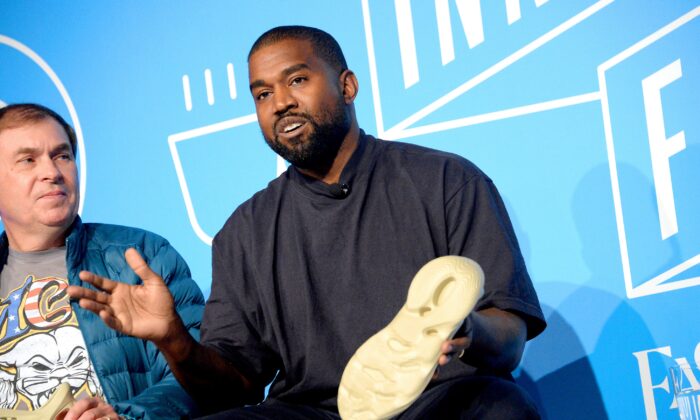 “Own your power. Your power is not to just vote Democrat for the rest of our lives. That’s not the power,” West said while speaking at the Fast Company Innovation Festival in New York City.

West and Yeezy designer Steven Smith were discussing how they designed the popular shoe when West said he struggled to break through in the design space.

“You’re not going to go a whole interview with me without me saying it,” West added. “This is who you supposed to vote on. This is what you’re supposed to buy. This is your Popeye’s chicken sandwich you’re supposed to eat on. But it be exactly that. I have seen the board room in back. And it’s completely a concept of a demographic.”

West championed economic opportunities for black Americans, including encouraging them to buy land.

West said there’s one in three African Americans in prison right now, joining the calls to free convicted Texas killer Rodney Reed, who is slated to be executed on Nov. 20.

“For black people, I’ve got to say, don’t just be a demographic. Own your power. Your power is not to just vote Democrat for the rest of our lives. That’s not the power, just voting on who they told us to vote on,” he later added.

“The power is when I talk to my lawyer, and Adidas was treating me mean, and I have seven points determination, I put on my trenchcoat and said, ‘We moving our factories to America,'” West said. He said he plans to move all his manufacturing to South and North America in the next two years.

West, who met with President Donald Trump in Oct. 2018, has made other political comments recently.

West, speaking with radio host Big Boy shortly after his new album “Jesus is King” was released in late October, said: “We’re brainwashed out here, bro. Come on, man. This is a free man talking. Democrats had us voting Democrats with food stamps for years.”

“What are you talking about? Guns in the ’80s, taking the fathers out the home, Plan B, lowering our votes, making us abort our children … Thou shall not kill,” he continued.

When Big Boy wondered whether West’s support of Trump could be considered racist, West responded, “The most racist thing a person can tell me is that I’m supposed to choose something based on my race.”

“I’m not telling nobody not to vote Democrat,” he added. “I love Obama, I love lemonade, I love Wingstop, I love Polos, I love Jordans.”