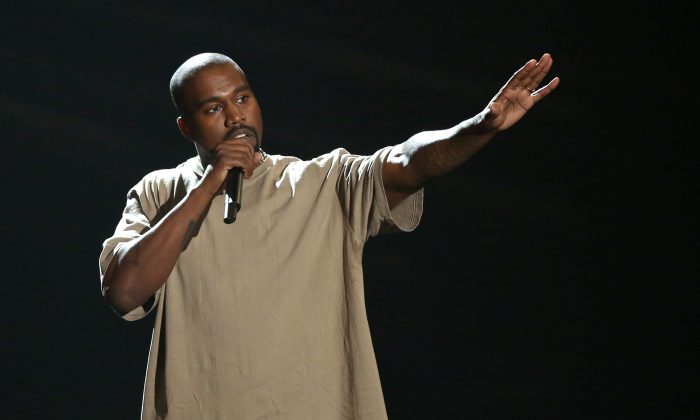 Kanye West accepts the video vanguard award at the MTV Video Music Awards in Los Angeles on Aug. 30, 2015. The rapper has had a very public struggle with his ego. (Photo by Matt Sayles/Invision/AP)
Entertainment

Contrary to popular belief, Kanye West isn’t only a fan of himself. In interviews and via Twitter, he more than often expresses great admiration for his wife, Kim Kardashian. His 21 million followers sometimes get other morsels, though.

West tweeted on March 24 to his 21 million followers, that Young Thug is an inspiration to him, and included the downloadable link to Young Thug’s new mixtape, “Slime Season 3.”

So who is Young Thug?

Young Thug, real name Jeffrey Williams, is an Atlanta-based rapper who has been making waves in the hip hop community. With collaborations alongside Drake, Nicki Minaj, and newcomer Fetty Wap under his belt, Young Thug appears to have gotten the seal of approval from major musicians.

He released his debut album, “Barter 6” in 2015 and charted number 22 on the Billboard 200 charts, selling about 17,000 copies in the first week. He has since released several mixtapes, with “Slime Season 3” being his most recent.

Young Thug is also known to take fashion risks, similar to West, and is as outspoken as his rap peer.

Now that Young Thug, 24, has received praise from Kanye West, will his career take off?

Kanye West’s Struggle With His Ego in 10 Tweets

The tweet has amassed close to 38,000 favorites and 29,000 retweets, including one from Young Thug himself.

Young Thug is super inspiring to me. Amazing artist!!! https://t.co/tMh438xqJ8