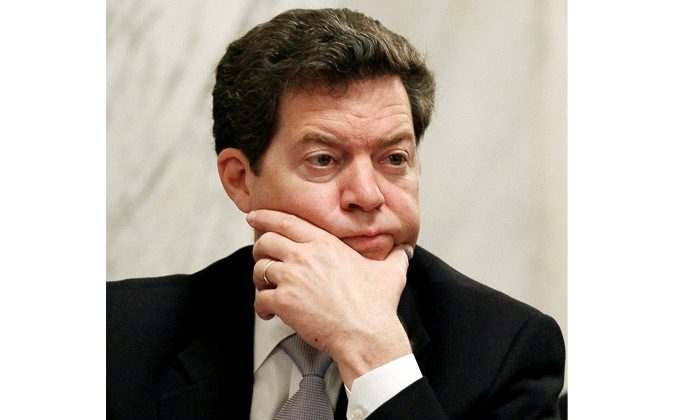 TOPEKA, Kan.—Already frustrated by Kansas frequently overshooting how much money the state will bring in month to month, state Sen. Jim Denning was anything but comforted by fellow Republican Gov. Sam Brownback’s latest budget plan and the widening gap it looks to fill.

Unveiled Wednesday to the Republican-dominated Legislature, the spending blueprint for the fiscal year that begins in July projects a $190 million hole—something Brownback believes can be patched by such things as juggling state funds and selling off assets of a soon-to-be-privatized state agency.

It isn’t a unique crisis—Illinois’ budget gap is said to be anywhere from $5 billion to $8 billion and Oklahoma is at about $900 million for the coming fiscal year.

Kansas’ budget woes began after the Legislature got on board with Brownback’s plan to slash personal income taxes in 2012 and 2013 in hopes of stoking the economy. But in this election year, discontent among Kansas lawmakers, some of whom voted for those tax cuts, isn’t hard to find.

“I’m not comfortable with the present situation,” Denning, the second in command of the Senate Ways and Means Committee, told The Associated Press after a hearing in which state budget director Shawn Sullivan outlined Brownback’s fiscal recommendations. “We’re walking a tightrope without a safety net.”

I’m not comfortable with the present situation.
— Sen. Jim Denning

Kansas’ official financial forecast is drafted every six months by Department of Revenue officials, Sullivan and members of his staff, researchers and economists from three state universities. But with the dozens of changes made to state tax laws since 2012, some critics contend that makes tax collections more volatile and harder to predict.

“It’s a bit like predicting the weather, and it’s hard to get it perfect,” said Duane Goossen, who served as Kansas’ budget director for 13 years under GOP and Democratic governors before Brownback took office in 2011.

While states prefer having reserves to use for month-to-month shortfalls, Kansas doesn’t have any money in the bank, “and I think that’s why you’re seeing frustration from legislators,” added Goossen, a vocal Brownback critic now serving as a senior fellow at the nonpartisan Kansas Center for Economic Growth. “They have no flexibility.”

All told, the state’s monthly tax collections failed to meet expectations in 17 of the 24 months in fiscal years 2014 and 2015. Tax receipts missed projections for all but two months of last year. Lawmakers weary of revenue forecasts that are frequently proven overly optimistic point to 2014, when wild swings dominated the first six months—exceeding expectations by a combined $127 million at first, then followed by three months that came up a total of $333 million short of expectations.

As a result, the state slashed its projections in November 2014, April 2015 and last November. For the looming fiscal year, the downward revision in tax collections was $186 million.

Democrats and some Republicans argue the financial problems show that Brownback’s tax-cutting experiment has failed. That crowd includes Republican Sen. Carolyn McGinn, who said Friday that she reluctantly voted for the cuts to support Brownback and believed lawmakers would get the chance to fine-tune the measure after it passed.

McGinn, who’s from Sedgwick in south-central Kansas, said she wanted a phased-in approach to the tax cuts “rather than jumping off the cliff without a parachute,” but said “all we’ve done is tax shifting.” Lawmakers preserved most of the income tax cuts last year but raised sales and cigarette taxes.

“We were doing well before all of this,” she said. “We were going through a recession like every other state. But we’re not coming out like the others.”

We were doing well before all of this. We were going through a recession like every other state. But we’re not coming out like the others.
— Sen. Carolyn McGinn

Brownback didn’t talk about the budget during his State of the State speech, presenting his budget plan a day later. He has said national forces, including soft to no growth in key Kansas industries such as aviation, agriculture and energy production, have prevented the state from expanding as much as hoped.

Republican Sen. Jeff Melcher of Leawood wondered aloud during the recent budget hearing whether the state’s revenue-estimating process could be improved, perhaps by bringing in outsiders to help with financial modeling.

“I kind of look at this budget as a Plan B in the event that everything works out well,” Melcher said, pressing the need for an alternate spending plan “based on the history of what we see and anticipating that history is not going to change dramatically.”

Sullivan suggested there may be room for that and promised to study it and get back to lawmakers, all of whom are up for election this year. Democrats hope to pick up seats in each chamber by making Brownback and the budget problems the main issue.

“We’re in a very uncertain time,” added Denning, who represents the Kansas City suburb of Overland Park, “and it’s happening on our watch.”