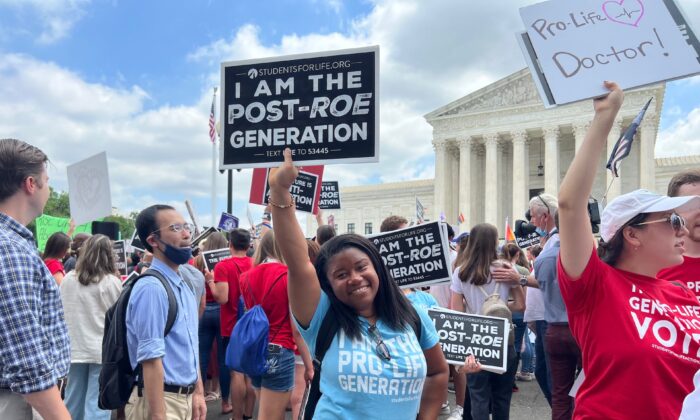 The first ballot test of the official, newly minted “post-Roe era” will occur on Aug. 2, when Kansas voters are presented with a proposed amendment on their primary ballots that declares there is no constitutional right to abortion.

The Kansas Value Them Both Amendment is the first of four proposed constitutional amendments addressing abortion that will go before voters during the 2022 election cycle. Three of the proposals would restrict access to the procedure; one would expand it.

A 2019 decision by the Kansas Supreme Court protects the right to an abortion under the state’s constitution.

The June 24 release of the U.S. Supreme Court’s 6–3 verdict to overturn the 1973 Roe v. Wade decision had been anticipated even before April’s leak of a draft ruling.

All sides of the abortion debate expected the court to uphold a Mississippi law that bans abortion after 15 weeks of pregnancy when it ruled on Dobbs v. Jackson Women’s Health Organization and to return regulation of abortion to the states.

In anticipation of the ruling, state lawmakers across the country have been adopting legislation to go into effect if and when the Supreme Court overruled Roe.

According to the Guttmacher Institute, a research and policy nonprofit that supports abortion rights, at least 531 “anti-abortion restrictions” were introduced in 40 states during 2022 sessions after lawmakers in 2021 adopted more than 100 laws restricting abortion, the most in any year in the past five decades.

At least 26 states are likely to either ban abortion outright or severely limit access to the procedure in the wake of the ruling, the Guttmacher Institute maintains.

Lawmakers in 13 states, including Texas, Utah, and Wyoming, have over the past decade—and especially in the past two years—adopted “trigger laws” that automatically make abortion illegal if Roe is overturned.

Court rulings have suspended “trigger ban” laws in Alabama, Georgia, Iowa, Ohio, and South Carolina. Those rulings will likely be overturned in the wake of the Supreme Court’s decision in the Mississippi case.

“We filed a motion in federal court moments ago to dissolve the injunction against Ohio’s Heartbeat Law, which had been based on the now-overruled precedents of Roe and Casey,” Yost announced in a Twitter statement shortly after the ruling was posted.

In tandem with these legislative initiatives, opponents and proponents across a handful of states have taken a different route by attempting to appeal directly to voters with proposed constitutional amendments addressing abortion.

The proposed Kansas No Right to Abortion in Constitution is the first measure that will go before voters.

Kentucky lawmakers have placed a similar proposed “no right to abortion” constitutional amendment on the Nov. 8 ballot, while in Montana, general election voters will see LR 131—Medical Care Requirements for Born-Alive Infants Measure—that would dramatically scale back access to the procedure.

Montana’s LR 131 states that “infants born alive at any stage of development are legal persons” and require “medical care to be provided to infants born alive after an induced labor, cesarean section, attempted abortion, or another method.”

The fourth abortion-related measure certain to be on the ballot—and the only one that expands “abortion rights”—is Vermont’s Proposal 5, the Right to Personal Reproductive Autonomy Amendment.

If adopted, the Vermont Constitution would state that “an individual’s right to personal reproductive autonomy is central to the liberty and dignity to determine one’s own life course.”

Voters in four states have already approved ballot measures declaring “no right to abortion” in their state constitutions.

Tennessee was the first to do so in 2014, with Alabama and West Virginia voters doing so in 2018. Louisianans adopted their “no right to abortion in state constitution” ballot measure in 2020.

Iowa voters will see a “no right to abortion in the state constitution” ballot measure in 2024.

The proposed Kansas Value Them Both amendment was placed on the ballot by lawmakers following two-thirds supermajority votes in both chambers of the legislature in January 2021.

A “yes” vote would amend the Kansas Constitution to say nothing in the state constitution creates a right to abortion or requires government funding for abortion and that the state legislature has the authority to pass laws regarding abortion.

That legislative authority is a huge issue after the state’s Supreme Court overturned the 2015 Kansas Unborn Child Protection from Dismemberment Abortion Act in its 2019 Hodes & Nauser, MDs, PA v. Schmidt ruling, which held Section 1 of the state Constitution’s Bill of Rights protects a woman’s right to abortion, making Kansas one of 10 states where court rulings granted the right to abortion.

Kansans for Life director of communications Danielle Underwood told The Epoch Times in May that despite the anticipated overturn of Roe, the 2019 Hodes ruling still restricts what lawmakers can do “in placing restrictions on the abortion industry.”

In fact, Underwood warned, even the Guttmacher Institute has acknowledged that “the state of Kansas is about to become a destination state for the abortion industry to push women to” because of the 2019 ruling.

“Kansas is unprotected territory, a haven for taxpayer-funded, late-term abortions. They will both be allowed” even after the court’s June 24 ruling unless voters adopt the Value Them Both amendment, she said.

In Colorado, where lawmakers passed a Reproductive Health Equity Act enshrining abortion access this year, pro-life forces are mounting a signature-gathering petition to get a proposed ban on abortion, except to save the mother’s life, adopted by voters in November.

A proposed Unlawful Murder of a Child ballot measure was cleared for signature-gathering in April and needs 124,632 valid signatures by Aug. 8 to qualify for the ballot.

More likely to get on November’s ballot—and be among the most-watched votes in the nation—is the Michigan Right to Reproductive Freedom Initiative.

Sponsored by Reproductive Freedom for All, a coalition that includes the ACLU and Planned Parenthood, the proposed constitutional amendment was cleared for signature gathering in March.

The prospective amendment would create a state constitutional right to reproductive freedom, which it defines as “the right to make and effectuate decisions about all matters relating to pregnancy, including but not limited to prenatal care, childbirth, postpartum care, contraception, sterilization, abortion care, miscarriage management, and infertility care.”

Sponsors need 425,059 signatures by July 11 for the proposal to appear on November’s ballot.